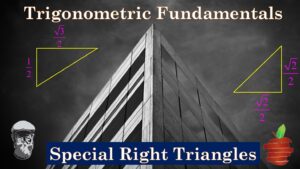 The two special right triangles are as important to Trigonometry as arithmetic is to mathematics.  On this page you will find the information you need to understand the relationships they have between their sides and angles, as well as plenty of practice helping you learn to apply those relationships to find missing information.

In the tabs below you’ll find notes that you should patiently read through, a pair of PowerPoint lessons you can download and play, a set of practice problems and two videos.  The first video explains why these triangles are important and how their properties.  The second video explains how to apply these properties to find missing information in other triangles. 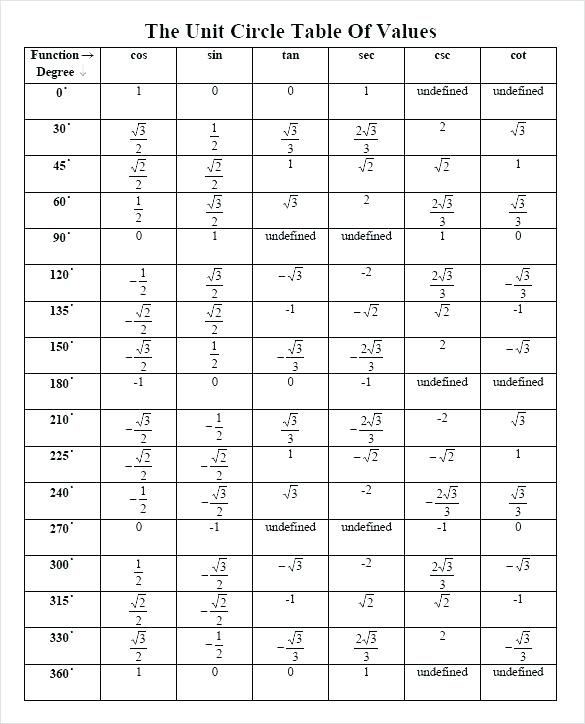 Our goal with this section is to learn about where all of those values originate.  It would be a lot of information to memorize, but if understood, is easily recalled.

There are some conventions (or rules) that guide how these triangles are positioned on a coordinate plane, but we’ll get into that in the next section.  For now, our goal is to really know and understand these two right triangles, inside and out.

While trigonometry can be used for any sides triangle, or any angle for that matter, these two triangles make the foundation.  Their values can be calculated without use of ugly tables, or the use of calculators.  As such, these are about as important to understanding trigonometry as anything other than the fundamentals and basics of what trigonometry is.

Our first triangle is the isosceles right triangle.  Let’s apply the Pythagorean Theorem to this triangle and see what happens.  (Keep in mind that because it is isosceles, the two legs are the same length as are the two angles, both 45°.) 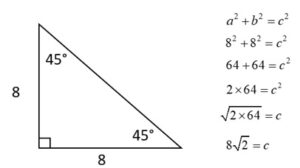 The reason we do not multiply 2 and 64 is because our next step is to take the square root.  When simplifying a square root we want to factor to find the largest square number.  So, it is easier to write 2 × 64, than it is to write 128, and then factor it.

What would happen if this triangle didn’t have sides of 8 (unknown units), and instead had sides of 19? 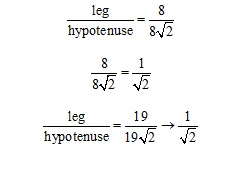 Now, with trigonometry we use special notation to signify these ratios.  We would say sin(45°), or cos(45°).  In either case, they’re equal to, “one divided by the square root of two.”

We can say that for an isosceles right triangle, the hypotenuse is equal to the leg times the square root of two.

When using a calculator, rationalizing the denominator isn’t necessary.  But, this level of trigonometry is done without a calculator.  In this case, doing math with a rational denominator is a whole lot simpler than with an irrational denominator.  (The square root of two is irrational, it cannot be written as a ratio of integers, cannot be written as a decimal.  Our most accurate way of writing it is with the radical symbol.)

In case you forgot how to rationalize the denominator, let’s review. 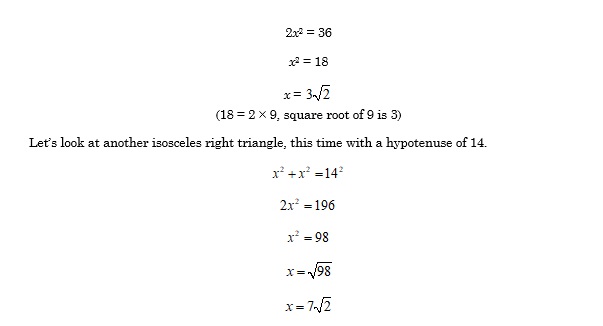 No matter what the hypotenuse is, the sides are half of that times the square root of two.  Condensing what we’ve learned about the isosceles right triangle, we have the following: 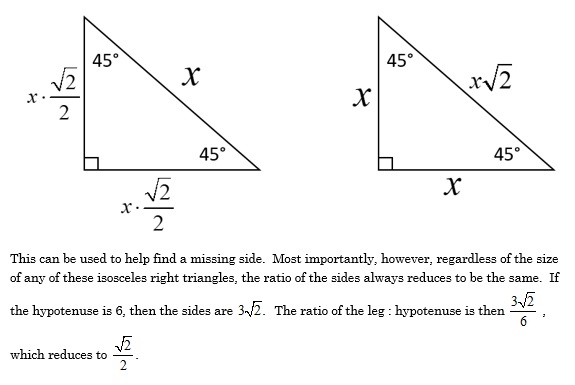 Let’s look at our other triangle.  It isn’t a clean and pretty, but still easy enough to remember.  We’ll not go through the exploration of finding the sides, but instead just verifying the relationship between the sides.  We are talking about a 30°, 60°, 90° triangle, so the shortest side will be opposite of the 30° angle, while the longer side (not the hypotenuse), will be opposite of the 60° angle.

So, the numbers are plausible, now let’s verify with the Pythagorean Theorem.  Keep in mind that the number we say is x could be any positive integer.  So this works for any whole number you can imagine. 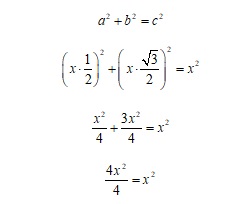 Let’s see what happens with the trigonometric functions.  We will use the hypotenuse of x, because it could be any number.  We don’t need to explore specific values when we can explore all possible values at once!

This is ugly, but it can be rewritten with a division symbol like this:

Division is multiplication by the reciprocal. 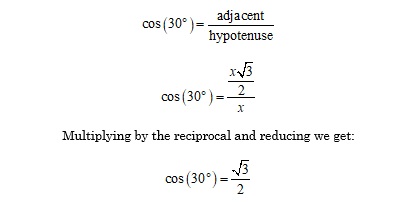 Summary:   These two special right triangles are the most important triangles to know when learning trigonometry.  While trigonometry can be used for any angle, the fundamentals will be developed with angles from these two triangles.  It is imperative that these are understood fully.

The first lesson (PowerPoint) shows why the relationships exist between the sides of the special right triangles.  To download the PowerPoint, please click here.

The second PowerPoint lesson shows, in greater detail, how to use the properties of the special right triangles to find missing sides and angles of triangles.  To download the PowerPoint, please click here. 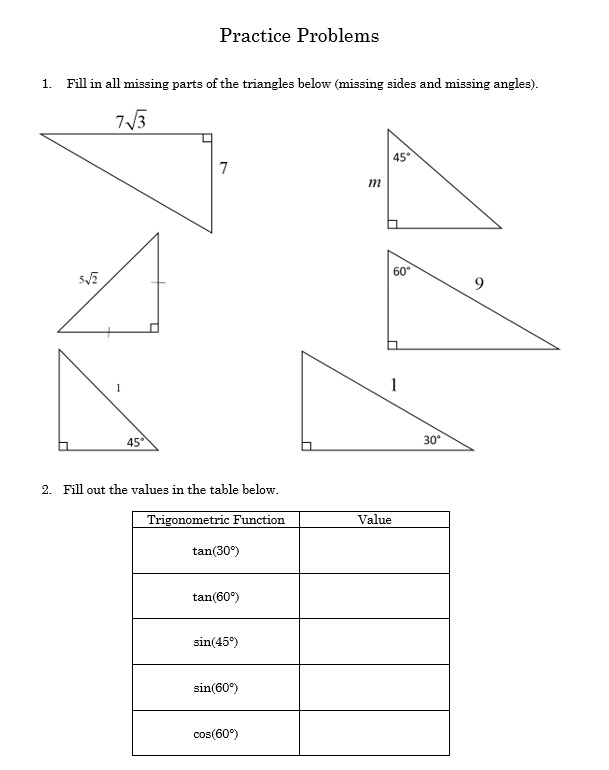 This was recorded in a Google Meeting where students were asking questions and we reviewed the topic.