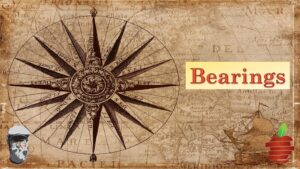 Bearings are used in navigation.  A bearing is a direction from north (rotation), in the clockwise direction, communicated in a three digit degree.  East is a bearing of 090 degrees, south is a 180 degree bearing, and west is a 270 degree bearing.

Bearings themselves are not complicated.  However, nearly everything from the subjects of Trigonometry and Geometry need to be recalled without prompt when dealing with problems involving bearings!  That’s where the trouble originates.

The information on this page will help you navigate these difficult questions.  Read through the text in the first tab, try the examples there yourself.  Then, watch the video and try the practice problems.

If you need to find your bearings, you’re undoubtedly lost, turned around and confused as to which direction is what!

While left and right are not fixed directions, north, south, east and west are.

Bearings are a way to communicate direction to prevent this confusion.  A bearing is a direction, rotated from north, clockwise, and always communicated in 3 digits.  So, a 270° bearing is turning due west.

Keep in mind bearings are used in navigation, as in ocean going ships and airplanes.  Bearings make communication clear and easy, nobody ever has to wonder, which direction do I turn?  If a navigator says take a 212º bearing, that is 212º from north, rotating clockwise.  If the pilot was already heading 200° (again, measured from north, rotating clockwise), then he or she would only have to adjust their trajectory by a bearing of 012°.

There’s not much information about bearings other than what has been shared.  But, in order for you to make sense of it, you’ve got to really understand what bearings are.  A good way to do just that is with these over-arching questions.  If, as you’re learning about bearings, you can keep these questions in the forefront of your mind and consider your answers in light of new understanding, then you’ll come away with a good idea of what bearings are and how to manipulate them.

Q:  What’s the difference between a bearing and a degree?

Q:  What’s the difference between a bearing and a vector?

Example #1:  What is the bearing shown on the diagram below?

Example #2:  A ship is heading on a bearing of 315°. Draw a diagram of this situation, label the bearing. Describe the direction.

A couple of key ideas to keep in mind.

What makes bearings a difficult topic to learn has little to do with bearings.  Bearings themselves are not complicated.  What is complicated is all of the Geometry and Trigonometry that must be recalled and applied intuitively when dealing with bearings.  Here’s an example.

A boat sails from point A to point B on a bearing of 112°.  The boat then sails to

Advice:  Read and understand the information and instructions completely.  Examine the diagram carefully.  Sometimes it is best to sketch the diagram, even if you have a printed version.  This helps you identify important parts and relationships between things.  Then, write down easily found information.  List relevant facts you know.

Often you will find that you have answered some of the questions.

Let’s start with question 1, the bearing of C from B.  That is the angle starting at B, facing north, turning clockwise until you’re facing point C.  Here are some important facts.

If you look at the triangle, we have a known pair of angle and opposite side.  We need an angle, and know its opposite side. That’s what’s required for the sine rule (law of sines).

Question 3 is asking for the distance between points A and B.  To use either the cosine or the sine rule, we would need to know the angle opposite of line segment AB, which is angle ACB.  We know the other two angles of the triangle, 88° and 21.6°, which leaves 70.4º for angle ACB.

Typically, the law of sines is easier to calculate, and if given the choice between using the sine or cosine rule, the sine rule is the better choice.  However, since we are reviewing some of what makes problems involving bearings tricky, and you will often have to use the cosine rule (law of cosines), let’s do so now, just for a refresher.

Here’s what we have.  We need a side length and know its opposite angle.  The missing side is a in the formula, and the opposite angle to that side is A, in that formula.  The other sides, b and c can be assigned however you please.

Let’s start with the formula, and then manipulate it to solve for a before plugging in numbers (less chance of arithmetic errors).  Then we’ll plug in our numbers, written on paper because your calculator work will NOT be graded.  Then, plug the information into the calculator, two times to check your work, and then you’re done!

Summary:  Bearings are a direction (rotation) from north, measured clockwise, and listed in three digits.  Just about anything you’ve learned in Geometry and Trigonometry can come into play, so you must be creative and brainstorm ideas when you get stuck with problems involving bearings.