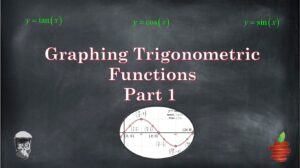 If you take your time and really understand this material, what follows later, which might seem more complicated, will be accessible and you’ll learn more quickly.

Go through each tab below, watch the videos, try the practice problems.  Take your time and be patient.  When you’re done, you’ll be a better math student for your efforts! 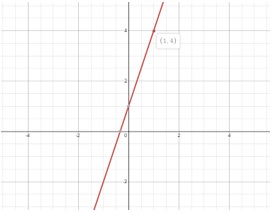 Q:  Is the Unit Circle a graph?

A great way to think of a graph is as a picture of all of the solutions to an equation.  Each point on a line or curve satisfies an equation, makes it true.  For example, if we had the equation
y = 3x + 1, the coordinate (1, 4) would be on the graph.  However, the point (1, 8) would not be.

The Unit Circle is a diagram that helps us understand how Trigonometry is defined and also a reference for finding common Trigonometric values.  But, it is NOT a graph.  It is not a picture of the solutions to an equation, though can you can write an equation that is a circle.  But that circle will not have anything to do with Trigonometry.

The point is this:  When you see a 30º angle on the unit circle, and you see the coordinate

In this section we will discuss how to graph sine, cosine and tangent, and learn the basic features of those graphs.  This will provide us a common, basic understanding of the graphs of the three fundamental Trigonometric functions.

Graphing sine, cosine and tangent is nuanced.  There are a lot of little pieces to keep in mind.  No single piece of information itself is difficult to grasp, but combined it can be overwhelming.  As such, pay careful attention and give plenty of time to your first few graphs.  This will help you to understand the basics of the graphs, as well as the mechanical skill of creating the graphs.  This will help you to be efficient and accurate when it counts most (on assessments).

Idea #1:  Curves are continuous, without gaps or spaces between consecutive points.  The curves are made from points, with an input (x), which is an angle’s measure in degrees or radians, and an output (y), which is a ratio of sides of a right triangle.  Because degrees are measured in Real Numbers, and Real Numbers are continuous, the graphs of Trigonometric functions are curves.

We will use the angles on the Unit Circle to create the outline of our curve, but we can connect those points because there are infinitely many angles between 30º and 45º, for example.

Idea #2:  We will use a t-chart to find the coordinates.

We will need to approximate these to find their position on the y – axis.  There are only two values we need.

To set up your x – axis, draw your horizontal line and place a mark where you’d like 360º (or 2π) to be.  Divide the distance in half, which is 180º.   Each of those halves can be cut in half again, providing you with the 90º and 270º locations.  Divide each of those segments in half and you have all of the multiples of 45º.  From there, you can estimate 15º on either side of the 45º multiples and you’ll have all of your angles from the Unit Circle on the x – axis. 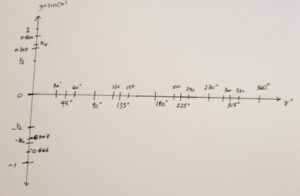 The y – axis is much simpler.   However, give yourself plenty of space because you need to find a consistent and accurate way of finding 0.5, 0.707 and 0.866.  As an example, refer to the picture of the hand-drawn coordinate plane that is appropriate for one period of sine or cosine.​

Let’s get to it.  Here’s a t-chart for the initial values of sine.  You should be able to fill this chart out from memory of how the Unit Circle is constructed.  Fill out this blank t-chart and then use the Unit Circle for reference and to check.  A completed t-chart follows. 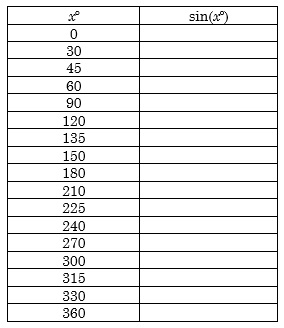 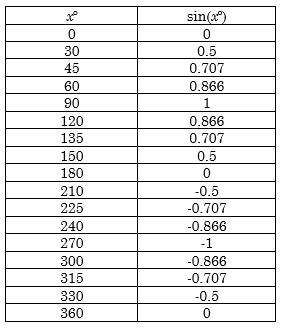 Remember, each of these rows on the t-chart is a coordinate.  So, (330, -0.5) is a coordinate that will be on the graph.  When you plot all of the points, you’ll be something that looks like the following.  (Note:  The letter X is used here instead of dots in an attempt for greater accuracy.) 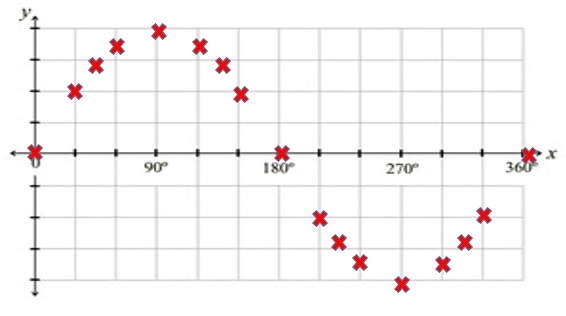 Once the you’ve placed a mark on each coordinate, it is time to connect the dots.  This is a curve, not a series of line segments.  When you connect the dots make sure your curve is smooth and continuous.

Below you’ll find a computer generated graph (desmos.com).  Your graph should be some approximation of this.

There’s no need to fill out an entire t-chart every time, but it is important to do so once or twice so you can realize why the shape of the sine wave looks and behaves as it does.

Here are some key points with short explanation.  There will be a reference chart that follows which will compress all of this.

These properties of the graph of sine of x will help you identify when a graph is sine, and also graph the variations of sine.

Here are the key features we will use to sketch a graph without filling out a t-chart. 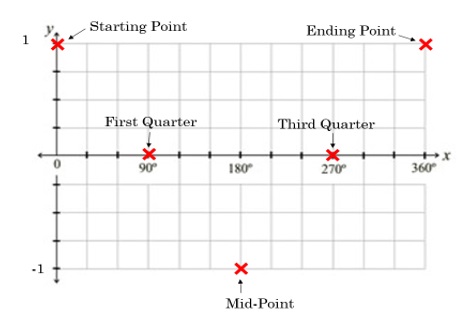 Start with these points, then make a smooth and continuous curve.  This is valid because all of these points are inputs and outputs of cosine.  For example, cos (90º) = 0, the first quarter point.

The last graph we will make is of y = tan(x).  However, this requires understanding something new, an asymptote.  Let’s look at the domain of each of these three functions so we can see how they’re different.

What this means is that the output for the function tan(90º) does NOT exist.  There is no number times zero that equals one.  To the right is a screen capture of what happens on a computer’s calculator when you try to find the value of tangent of 90 degrees.  You get yelled at!  Some calculators will say DNE, or DOMAIN ERROR.

The reason we can make the graphs of sine and cosine smooth and continuous is because the domain is unlimited.  It is unbound in any direction, has no gaps or missing values.  Let’s take a look at how tangent looks. 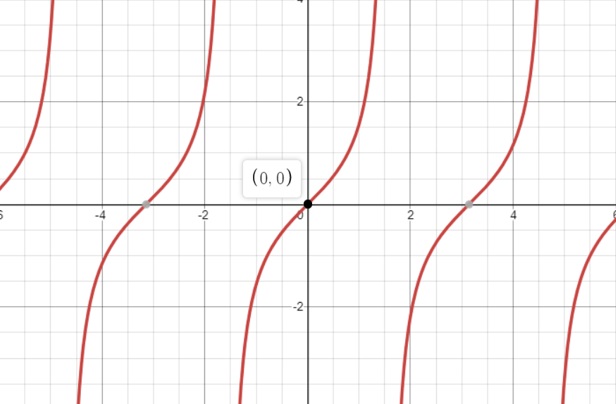 Once we understand why it looks this way, it is actually a very easy graph to construct.  To understand it, let’s introduce the new concept of an asymptote.  For now, we can think of an asymptote is a missing set of values (co-linear).  On the graph above, which is in radians, notice that π/2 and – π/2 don’t have outputs.  (π/2 is about 1.6.) 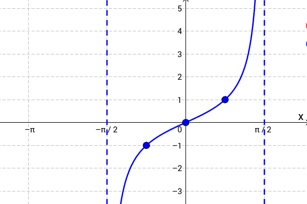 The graph to the left (from GeoGebra.com), has vertical dotted lines showing the asymptotes.  A graph is a picture of all solutions, and in a way, asymptotes show what the graph is NOT.

Another key feature of an asymptote is that as the graph goes “off to infinity,” the distance between the curve of the graph and the asymptote approaches zero, but they never touch.  They approach being parallel with a distance of zero.  In the diagram below you’ll see two pictures, both the exact same graph of y = tan(x), with the missing values highlighted.  This was made by also graphing x = -90º, and x = 90º. 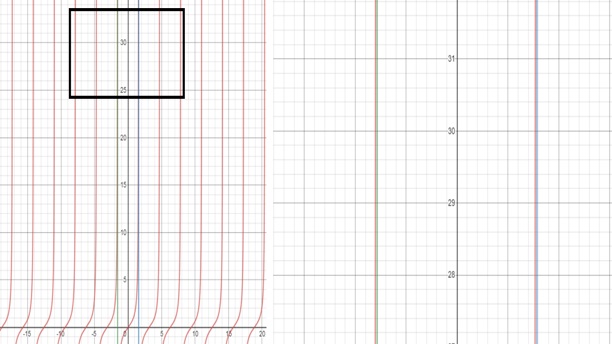 These missing values and asymptotes makes graphing tangent entirely different than cosine and sine.  However, in some ways it is a lot easier.  Let’s look at a table of key features, and then discuss a few points on the graph (because you cannot just read the outputs off of the unit circle like you can with sine and cosine).

The other common inputs are multiples of 30º and 60º.  If you’re having to write exact answers (irrational values), you’ll often end up having to write a compound fraction, multiply by the reciprocal and then rationalize the denominator.  Let’s see how this looks.

To sketch a graph of y = tan(x), let’s combine our key features and these points.  Here’s the order that often is easy to remember and execute.

(Thank you to mathbits.com for making blank coordinate planes marked for trigonometric values available for free to all users!) 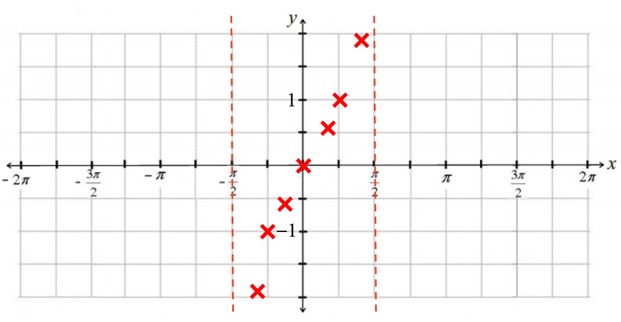 Summary:  It is imperative that you understand the basic input/output values of sine and cosine.  From those you can sketch a graph even if you forget the key features, or mix them up.

Confusing the starting point for sine and cosine is incredibly common.

Knowing why sine and cosine start as they do is important.

If you know the values for sine and cosine you can figure out tangent.  The graph of tangent has a shorter period and tangent’s graph also has asymptotes because the domain has gaps.  Those asymptotes, in a way, fill in those gaps. 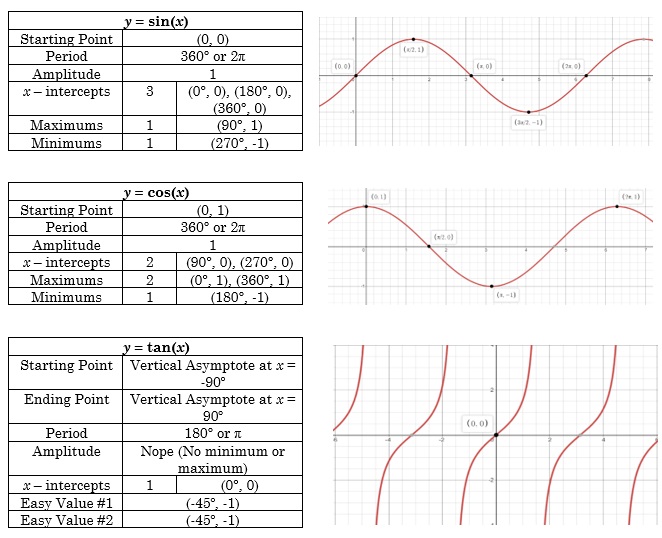 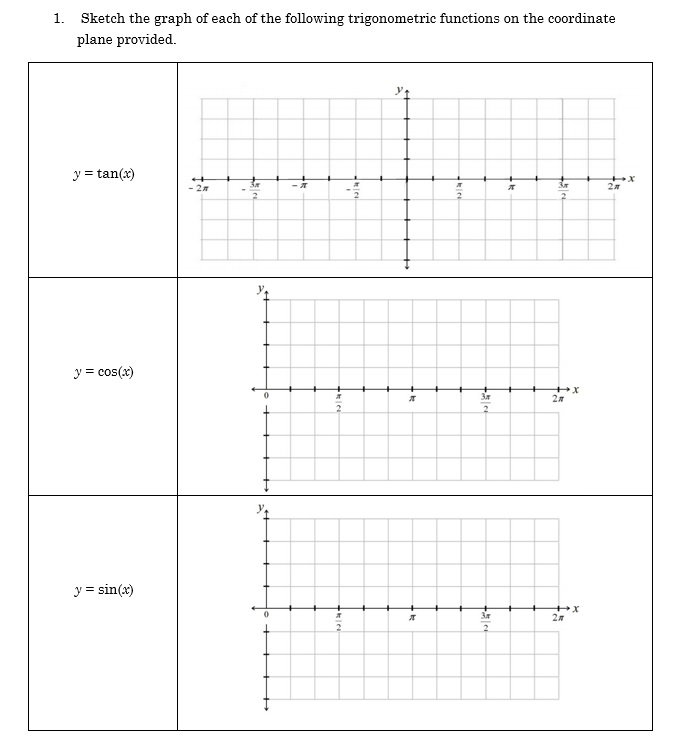