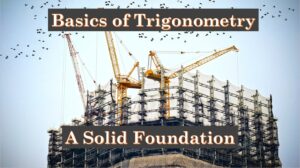 On this page we will introduce what Trigonometry is, how it basically works, and some of the key concepts and conventions.

Use the tabs below to read through the notes, access some practice problems, and watch a video.  Once you get these concepts and ideas under your belt, you’re ready to build you understanding of more advanced applications of Trigonometry.

This is undoubtedly something you’ve seen before.  In action it would look like the following: 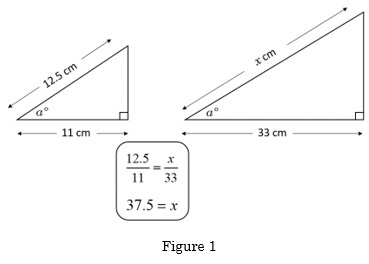 The second idea is part of the Triangle Inequality Theorem.  This theorem states the sum of the two shorter sides of a triangle must be larger than the longest side of a triangle.  This makes sense because you couldn’t create a triangle from a sides of 3 and 4, and then 86 (all the same unit).

This makes sense because an angle is a measurement of rotation around a point.  Where two lines intersect they create a point (a vertex).  Each of those lines is what we call adjacent to the angle, or next to.  The greater the rotation between those two lines, the larger that angle and the farther apart they’ll be.

What’s wonderful about mathematics is that it compresses ideas by making use of properties and patterns.  There’s no need to reinvent the wheel every single time you figure something out.  For example, we don’t need to show that the ratio of corresponding parts is equal for similar triangles, or that if the angles are all congruent, then the triangles are similar.  Once we understand that, we can just use it!

Trigonometry is used to find lengths (distances) and angles.  It is powerful because we still use Trigonometry to find the distances between galaxies, but also spatial relationships between microscopically small things.

Where students often get lost in Trigonometry is understanding what properties are being used.  It is easy to get lost in the notation.

Adjacent and opposite sides are NOT fixed.  They’re relative to an angle.  The side that is 11 cm is opposite of the angle that’s not marked.

Trigonometry uses specific language to help us keep track of what is meant, what sides are given, what sides are used when an angle is not provided, and so on.  Let’s start with the three basic trigonometric functions.

Here’s what those functions mean.

Each of these ratios is dependent on the relationship between the sides and the angles.  The trick is determining what sides are opposite and adjacent.  Again, that’s relative to the angle.

Function Notation:  Do you remember that a function is a pairing of an input to a single output?  For example, f(x) = 3x + 1.  Here, x is the input, and the output is one more than three times the input.  Not all functions have a mathematical operation, however.

You could have a function p(n), where the input n is matched to the nth prime number.  So p(4) = 7, because 7 is the fourth prime number.  This example is provided because not all functions have a calculation component to them.  Trigonometric functions are very much this way.

The input of a Trigonometric Function is an angle.  The output is a ratio of sides.

The variable we use for an angle is called, “theta.”  It is this Greek letter:  θ.  Different countries have slight variations in notation, like using x instead of θ, but the concepts are the same.  We do not use a, b, c, x, or y because a, b, c are letters used for sides and angles, and x and y are on the coordinate plane.

The input is the angle and the output is a ratio of sides.  We don’t use letters like f(x) or h(x), but abbreviate the names sine, cosine and tangent.  They are functions, however.

For trigonometric functions, the inverse functions are called “arcsine, arccosine, and arctangent.”  They’re written sin-1, cos-1, and tan-1.  They have a ratio of sides as the input and the related angle as the output. 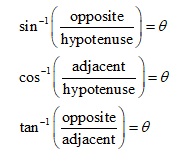 The reason this is such a powerful, and long lasting branch of mathematics, is because no matter the side of the triangle, the ratio of the sides will be the same for a smaller triangle that can be measured.  This is how Mount Everest was discovered to be the tallest mountain above sea level on earth.  It was measured, using trigonometry, from 140 miles away in the mid-1800s.  Let that sink in for a minute.  People could calculate the height of a mountain, from the ground, and from 140 miles away using trigonometry. 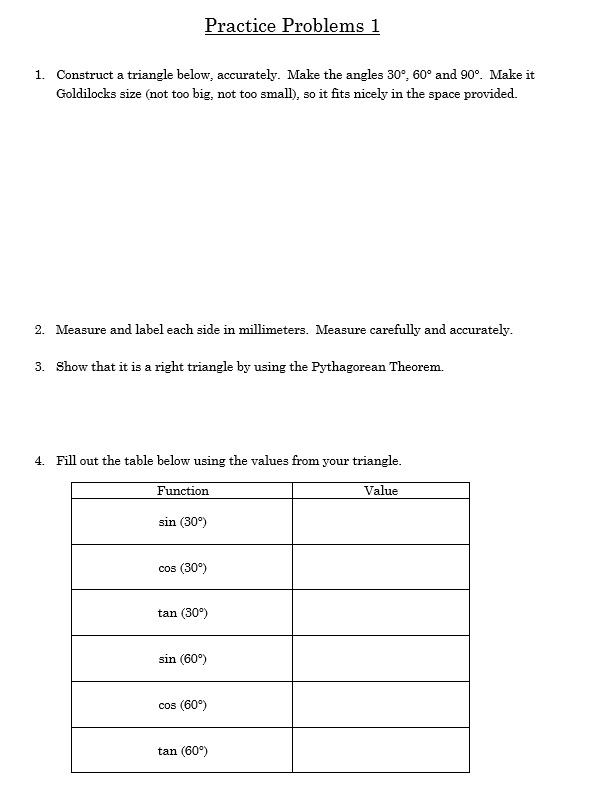 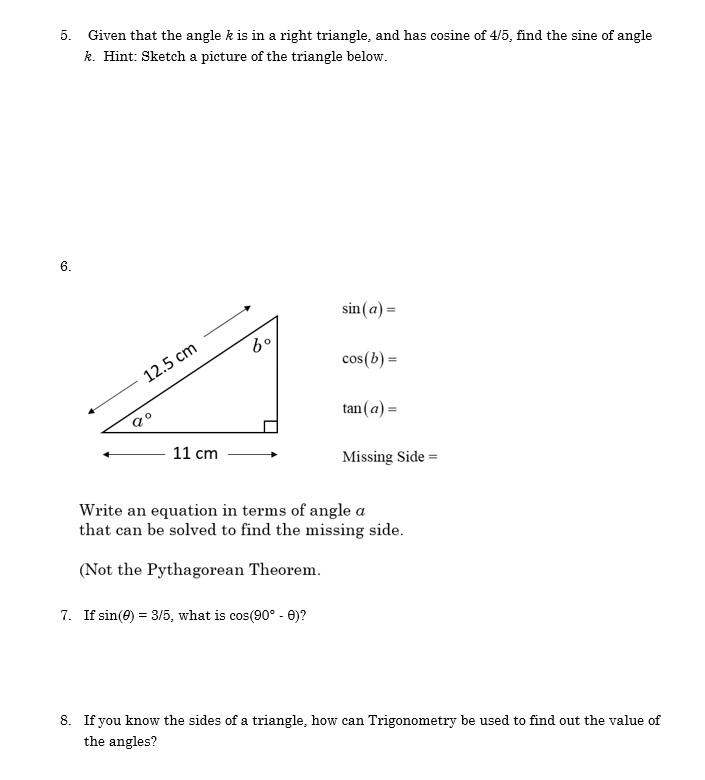