Radians and the Unit Circle 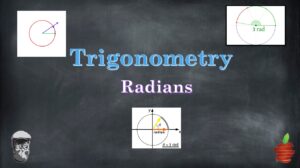 Radians are a unit of measure for rotations commonly used in Trigonometry.  In short, a radian is a distance along a circumference of a circle, equal to the length of the radius.

To learn about radians, especially how to convert between radians and degrees, and degrees and radians, and to learn some short cuts to help you remember how to fill out a unit circle in radians, please use the tabs below.  Begin with the first tab, which contains notes and explanations.  The video might help provide clarity.  Download and play the PowerPoint, then try the assignment.  This should help you establish a solid foundation with radians.

Background Information:  Radians are the SI units used to measure angles.  SI stands for (basically) system international.  Other SI units are meters, kilograms, and seconds.  Radians are in terms of the number π.  So, 2π radians is actually an irrational number, approximately 6.28 radians.

A degree is defined such that in a full rotation there are 360 degrees.  If you’re facing your bedroom window and you spin around completely so that you’re again facing your window, you’ve rotated 360 degrees.

Radians are similar in that they measure rotation, but have a relationship with the radius of a circle.  In short, if you take the distance of the radius, and make it into a curve, and wrap it around the circumference of the circle, you get 2π radians.  This makes sense because of where the number π originates.  One radian is an arc length the same distance as the radius, made by a central angle.

One radian of rotation is approximately 57.3°.

Converting Between Radians and Degrees:  The most consistent way to convert between radians and degrees is with a proportion. The ratio we will use comes from the fact that a full circle of rotation is 360° and also 2π radians. Depending on what it is you’re converting to, set up one of the following.  (A proportion is made from equal ratios.)

Let’s see a couple of examples for the sake of clarity.

Since we’re converting to radians, we want radians to be in the numerator of our ratio.  That’s typically the easiest way to solve a proportion.

The Unit Circle:  You may be required to know the conversions of radians into degrees for the angles on the Unit Circle, and may have to do so without a calculator.  You can try to memorize, or you can use a basic division/counting trick. 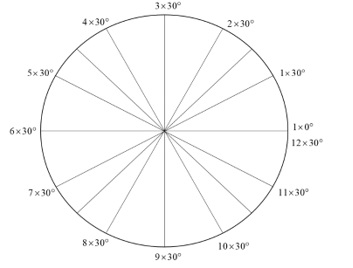 Here’s how it works.

Let’s start with 30 degrees.  If we count 30 degrees repeatedly until we get around the circle, we have 12 angles.  This doesn’t make much sense because we easily know what 4 × 30 is, so we just write 120.

But, when we use radians, with exact numbers, this becomes a very handy approach.  And, do you see that we get nearly EVERY single angle when we approach this with multiples of 30º?

Let’s look at the same angles, multiples of 30 degrees, written in radians. 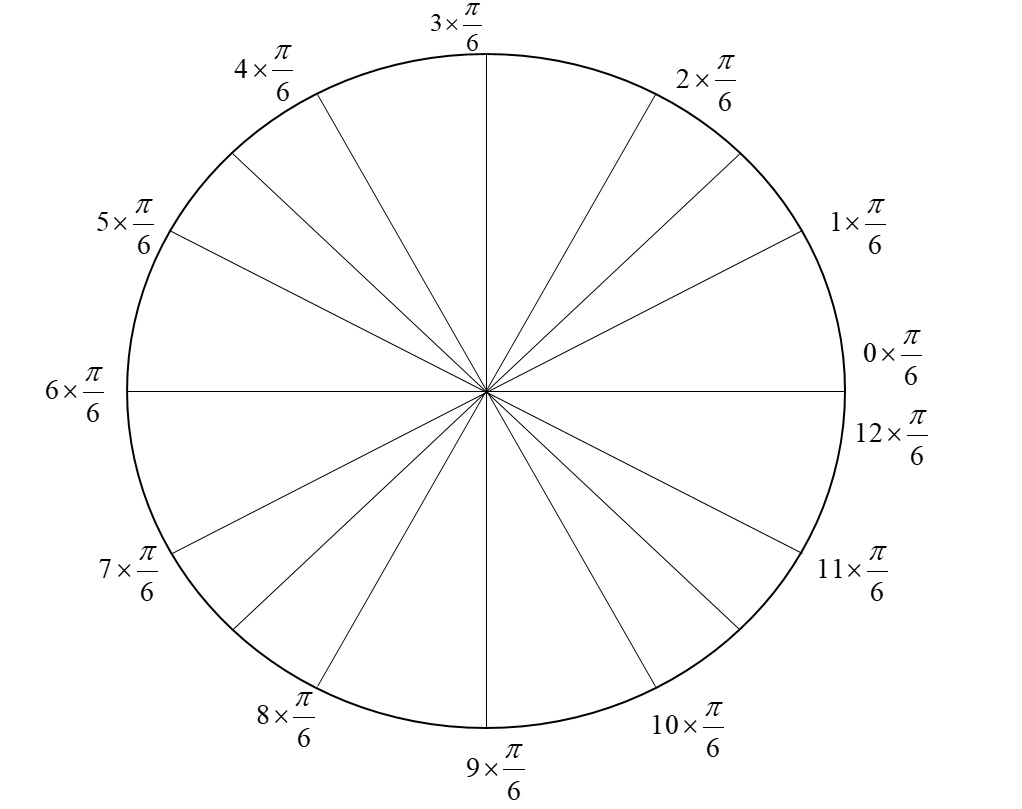 Now, the majority of these can be reduced.  But, do you see how we started counting π/6 radians until we completed the full circle of 2π radians?  Let’s reduce those that are can be reduced, and rewrite things like 5×π/6 as 5π/6. 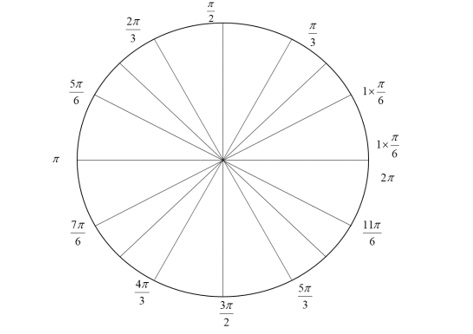 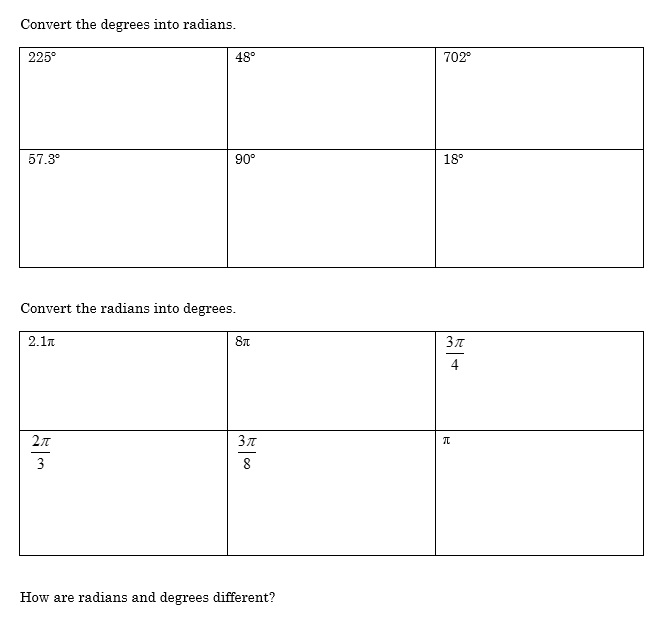 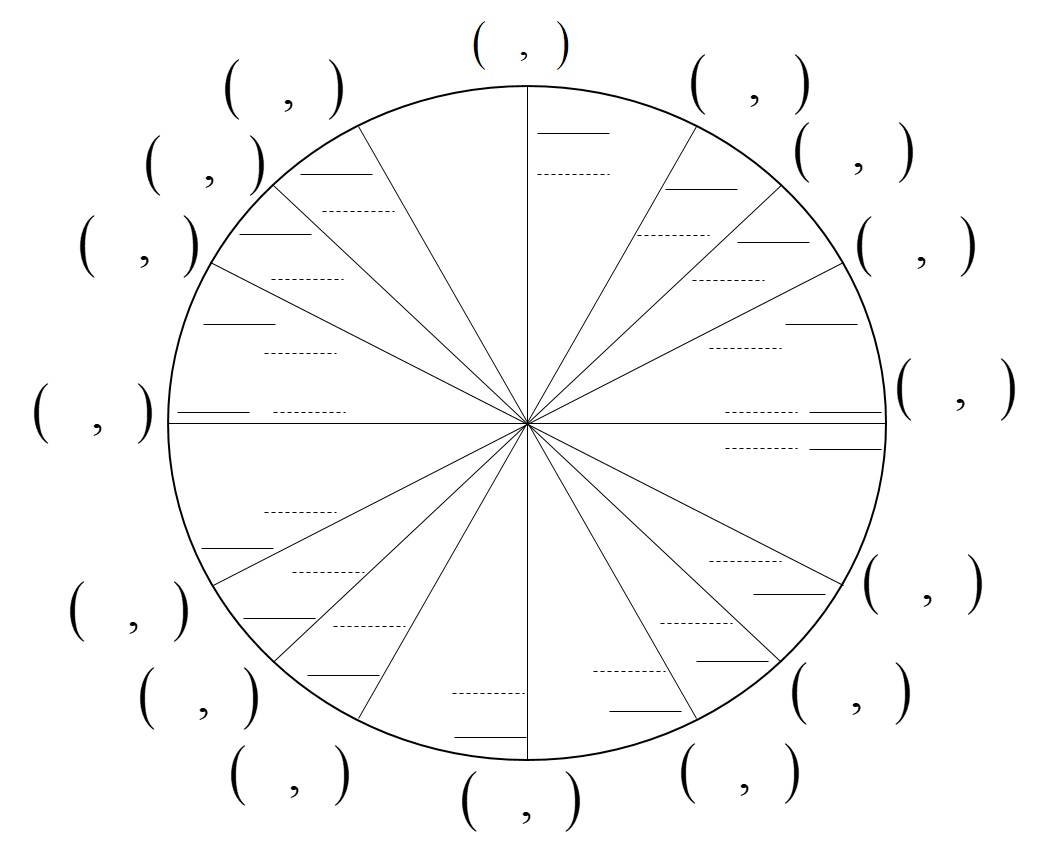