The Vertex and Intercepts 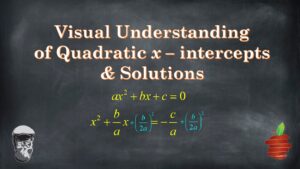 Graphing quadratic equations can be time consuming.  There are a lot of “things” to do, and a lot of potential pitfalls with arithmetic and formulas and such.

But, you can limit the amount of work you do, by understanding a quadratic equation’s nature.  You can visually understand if a quadratic equation will have two, one or zero number of x – intercepts.  All you need to do is find the vertex, which you’ll do anyway when graphing, and compare its location with the leading coefficient.  That’s what you’ll see how to do in this section.

Use the tabs below to navigate the notes, video, and practice problems.

There is this thing called The Discriminant, that can be used to show, algebraically, how many solutions (or x – intercepts), a quadratic equation will have.  It is super useful because finding the x – intercepts can be the trickiest thing about graphing quadratic equations.  Depending on the equation, you have three different methods from which to choose, and they can be both time consuming and frustrating.  But … if you knew that an equation did not have any x – intercepts, you could save yourself the time of trying to find them (only to discover after all of the work that they don’t exist).

In this section we will discuss a way to think about the location of the vertex and the direction of a graph’s parabola (shown by the sign of a), to determine the number of x – intercepts.  This is a particularly useful approach when graphing because you’ll need to find the vertex anyway!

Review of the Vertex

The vertex is either minimum (lowest) value, or the maximum (highest) value of a quadratic equation.   If a is positive, the parabola opens up, which makes the vertex the minimum value.  This is seen below in the diagram on the left.  If a is negative, the parabola opens down, which makes the vertex the maximum value.  (The leading coefficient is a, as in either y = ax2 + bx + c, or in vertex form of y = a(x – h)2 + k.)

There are two ways which we typically use to find the vertex of a parabola.  From standard form, we use a formula.  Standard form is y = ax2 + bx + c.  The formula is below.

It might look scary, but it’s not too bad, you’ll see.  Basically, the x – coordinate is the opposite sign of the coefficient b, divided by twice of a.  To find the y – coordinate you plug in the value for x and simplify.

From vertex form, the vertex can be found visually.  It is (h, k).  The only “tricky” part is the sign of h.  You will take the opposite sign of the value you see in h’s position.

For our focus here let’s consider that the vertex can be located in one of three general areas.

The sign of a (the leading coefficient) tells you the direction of the parabola.

Let’s consider the first case, the vertex being above the x – axis.

2. If a is negative, and the vertex is above the x – axis, there will be two x – intercepts.

Now, let’s consider the second case where the vertex is below the x – intercept.

2. If a is negative, there will not be any x – intercepts.

Now, for the last case, when the vertex is on the x – axis, there will be exactly one x – intercept.  A picture of that is below.  We have a case where a is positive, and another where a is negative.

Summary:  The idea here is highly visual.  Once you “see,” it, it can really help you make decisions about the steps you take when graphing.

Video
Here is a review of the practice problems:
Practice Problems

Use the location of the vertex to determine the number of x – intercepts for each of the equations below.