Quadratic Equations and the y - intercept 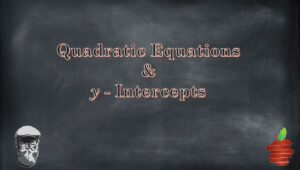 Use the tabs below to navigate through the notes, video and practice problems.

Quadratic equations will always have exactly one y – intercept.  Just as you did with linear equations, the way you find the y – intercept is you replace x with zero, and solve for y.  In function notation that is f(0).

In standard form, this is about as easy as can be.  The end result is that people can just find the y – intercept by visual inspection, like you could with y = mx + b.  Let’s see an example.

The y – intercept from Standard Form

Standard form is y = ax2 + bx + c.  When you plug in a zero for x, the only term that remains a non-zero term is c, except when the y – intercept is at the origin.  So, the logical thing to do, from standard form, is to recognize that c is the y – coordinate of the y – intercept.

The issue with this comes when you see quadratic equations written in Vertex Form.  There, the last number you see is NOT the y – coordinate of the y – intercept at all!  Let’s see how that works.

The y – intercept from Vertex Form

Since there is always one y – intercept, and it is simpler to find than the vertex or x – intercepts, it is a good idea to start with it.  So, find the y – intercept first if you’re asked to graph.  The next thing you’ll find is the vertex, which we will discuss in the upcoming section.