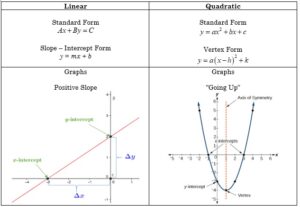 The quadratic formula can find the x – intercepts for any quadratic equation written in standard form.  To use the formula you just identify the coefficients and plug their values into the equation, and then follow the order of operations.

In this section we show where the formula comes from and guide you through using it.  A few pitfalls and misconceptions are covered, so be sure to read through the notes, taking notes of your own.  Then, watch the video and try the practice problems.

As always, be patient with yourself.  Learning new things requires that you work through confusion and often frustration to boot!

Let’s take the generic quadratic equation, in standard form, and use what we know about completing the square to solve for x. 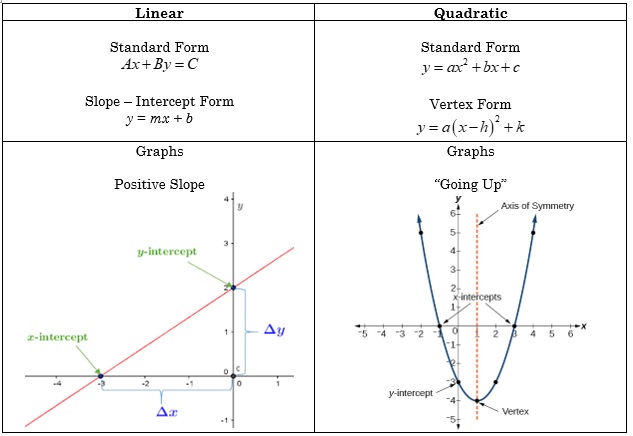 We have solved any and all quadratic equations here.  Instead of having to follow this process repeatedly, for specific quadratic equations, we can jump to the final result and just plug in values of a, b and c, to find the x­ – intercepts.

Example 1:  Use the Quadratic Formula to find the x – intercepts of the following.

Write the formula first.  This will help you keep track of how to plug in the numbers correctly, and help you to memorize the formula.  Even if the formula is provided in reference, you’ll be likely to mess up signs or the order of the letters if you aren’t familiar with it.

Now, identify a, b and c, from the equation or function provided.

Plug in the values, be careful of the signs and to maintain the order of operations.  Parenthesis can be particularly useful, especially with one of the values is negative.

Now, simplify the formula following the order of operations.  Square b, and multiply – 4 with a and c.  In the denominator multiply 2 and a.  Take the negative of b for the numerator outside of the square root.

If possible, simplify the square root, then reduce, if possible.

So, unless you’re required to, or cannot factor, do not use the quadratic formula as you’ll be more likely to make mistakes, and it is far more time consuming.

Let’s see another example, this one from an equation that is not factorable.

To figure out the approximations, to make finding these numbers on number line (like the x – axis) easier, we just approximate the square root of 7, then perform the calculation.

This is useful information because it can save a lot of time.  If you look at the radicand of the formula and determine that it will be negative for a given equation, then you do not need to carry out the calculations completely.  There will be no x – intercepts, which is all you’ll need to know, (at this level).

Let’s see specifically what it is we’re talking about here.  The square root portion of the quadratic formula is as follows.

No matter what, the first term of the radicand, (b2), will be positive because it is squared.  If that value is smaller than 4 times a times c, then the radicand is negative, since the 4ac is being subtracted from b2.

If b2 is larger than 4ac¸then the radicand will be a positive number, which will have two square root values.  In this case, there will be two x – intercepts.

It is typically the case that when dealing with the quadratic formula you will be using a calculator.  Be sure to round correctly, but not until the very last step.  Rounding too soon on a calculator will create compounding errors, making your final answer wrong.  This happens because when you round an irrational number, like the square root of 13, you are creating an acceptable error.  When you perform further calculation, like say multiplying that approximation by 2, you have doubled the size of that acceptable error.  Sometimes that is enough to make the error in approximation too large to be acceptable.