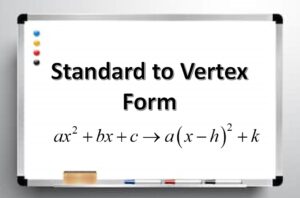 In the previous section we saw what perfect squares were, and how they behaved when the leading coefficient, a was just one.  We then used that pattern to change a quadratic equation into a perfect square, arranging it in vertex form.

In this section we will continue that same idea and process, but for the case where a is NOT one.  The arithmetic here can be ugly and overwhelming, but it’s something that is really not too difficult, if you’re (1) neat, (2) patient, (3) organized, and use the little tips and tricks we discuss here.

Read through the notes below, watch the video, then try the practice problems.  This is a new skill and requires some patience and practice.  The pay off is worth it.  Not only will you be able to do something tricky, you’ll be proud of yourself and more confident to try new things in the future!  Let’s get to it already.

In the previous section we saw how to complete the square to change a quadratic equation in Standard Form into Vertex Form, if the leading coefficient (a) was one.  In this section we will see how that works when a is NOT one.

Keep in mind, that the only coefficient that remains the same between Standard and Vertex Form is the leading coefficient.

Also, keep in mind, that as we perform these algebraic manipulations, each step must yield an equation that is equal to the previous in value.  Just like when factoring, the factored version must be equal to the original un-factored version.  So, when we’re done rewriting in vertex form, we should be able to convert our new vertex form into standard form by following the order of operations.

What we are going to see here is how to Complete the Square to change from Standard Form, like 2x2 – 4x + 7, into Vertex Form, like 2(x – 1)2 + 5.  Keep in mind, one could find the vertex using the formula, and then plug that into vertex form, keeping the value of a.  However, the purpose here is to learn to complete the square, as it has many other uses.

Let’s change our equation into Standard Form into Vertex Form, as an example.

Step 1:  Since we need the coefficient a to be the same in both forms, we will need to divide it out of the first two terms, as is shown below.  At the same time we will leave a space after the bx term, followed by a + sign.

Note that the original c term is OUTSIDE of the parenthesis.  If we distributed the 2 we would get back the original equation.

Step 2:  Now we take half of b – squared, add it, only for now, inside the parenthesis.

What is the 2, outside of the parenthesis, doing to everything inside the parenthesis?  Multiplying, right?  So, even though we only wrote a single + (-1)2, it is being multiplied by two.  In order to keep the new equation equal to the original, we must now subtract 2 of these…so, add the – 2(-1)2 after the original c term (7).

Let’s see an uglier example, one that doesn’t reduce so nicely, in shorter steps.

This seems tricky, but if you understand (1) each step’s purpose, and (2) why each step maintains equality with the original equation, the entire process boils down to just arithmetic.  With practice it gets a lot easier.

Step 1:  Divide a out of ax2 + bx, leaving space and moving c outside the parenthesis.

This seems tricky, but if you understand (1) each step’s purpose, and (2) why each step maintains equality with the original equation, the entire process boils down to just arithmetic.  With practice it gets a lot easier.

Step 1:  Divide a out of ax2 + bx, leaving space and moving c outside the parenthesis.

inside the parenthesis, then subtract

That’s all there is to it.  The fractions work out easy if you’re neat an organized, and the factoring is easy because the value of   – h (from vertex form), is (b/2a).

Below is a review of the practice problems.

This second video is a live YouTube feed where we reviewed this with students in a “virtual classroom setting.”