Mathematical definitions are precise, each word chosen with care.  A prime example is below:

Prime Number: A number that has exactly two factors.

One way to determine if a number is prime or composite is to try and divide the number by primes smaller than it.  If three, for example, divides evenly into 4,695, then it is composite.  Note that since 4,695 ends in a five, five divides into evenly, so we already know it is composite.  But there’s a nifty trick, a short cut, to check divisibility by three.

Perhaps the easiest way to know if a number is prime or composite is to be familiar with the primes less than 100.  There are twenty-five and they are listed below:

Since one has just one factor, itself, it does not satisfy the definition of prime or composite.

Relatively prime numbers will share exactly one factor, the number one.

An example of a relatively prime pair of numbers would be 15 and 77.  Neither number is prime, but 15 has factors of 1 and 3 and 5 and 15.  Seventy-seven has factors of 1 and 7 (for this case we only need list one of the sevens), and 11.  The only common factor they share is one.

An example of numbers that are not relatively prime is 15 and 9.  They share a factor of one and of three.

If two numbers are prime are they also relatively prime?  How do you know?

The purpose of factoring is often to find some property of the number in question.  Sometimes you will factor to determine if a perfect square or perfect cube exists as a factor of a number.

Other times you will be looking for a lowest common multiple so that you can find a common denominator, for something like:

The purpose of finding a greatest common factor, in Algebra, will be to reduce an algebraic expression, like:

What About Variables and Factoring?

A perfect cube is the product of a number times itself three times (cubed).

There is an interesting pattern in perfect squares.  See it below? 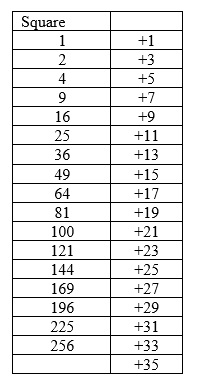 How many prime numbers exist?  Take a guess.  How do you know?  In a future section we will introduce mathematical proof and discuss this question.

In summary, a prime number has exactly two factors, one and itself.  Composite numbers have more than two factors, and one is neither prime nor composite.

This is a one or two-day lesson.  You can trim the PowerPoint to one day, or explore a second day to really encourage student thinking.

Note:  The objectives of this teaching this topic include:

The simple definition of prime is not sufficient to achieve all of these objectives.  It will be important for you, the teacher, to be creative in questioning and forcing students to articulate their thinking.  This material will provide you some ideas.

Numbers can be built, and deconstructed with multiplication.  This comes into play later with LCM and GCF, and with algebraic expressions, it becomes quite confusing because students mix up the meaning of multiple and factor.

Know the prime numbers less than 100, especially those numbers close to 100.  Understand that an Algebraic expression can be prime!

With a $2.00 purchase of the packet you help support this website.  What you get in this packet is:

If for any reason you are unsatisfied with your purchase, your money will be fully refunded and you get to keep the materials.
Click the PayPal icon below to safely and securely complete your transaction.