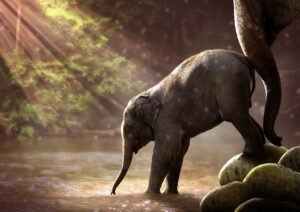 Teaching was never on the radar for me.  I loathed school, and didn’t hold much respect for teachers, or the profession of teaching.  When I went to college, not much changed along those lines, at first.  Now, I’m so passionate about the profession that I’m devoting a lot of my time and resources to create content and support for teachers that wish to teach mathematics conceptually and in a way that develops mathematical literacy in students.

I’d like to share with you the four people that really changed my view, and my mind, about teaching, and education as a whole.

The first “ah-ha” moment came before I even considered education as a career.  I was a 30-something Army veteran attending classes at a Community College.  My goal was to become a Game Warden, or maybe a Wildlife Biologist.  I enrolled in a College Algebra course and the instructor just blew me away.  Her mastery of the content combined with clarity of communication and scheduling of ideas, made the class engaging to the point where I saw her during office hours to talk about it.

Her name is Ana Jimenez, and she explained to me how she went about her profession.  I was inspired to the point that I decided, that semester, to switch and pursue a math degree so I could become a math teacher like her.  The service she provided me was the first time I’d ever experienced education, for what education has to offer.  Education isn’t about producing work, or getting answers.  It is about challenging the mind and learning to think.

Here’s what she brought to the classroom that I try to have in mine.  This list is NOT in order of importance.

I eventually transferred to the University of Arizona, where I pursued a degree in mathematics, with a focus on education.  There were a few counter-examples of quality teaching that I won’t get into, but there were also two superb educators, both mathematicians, not teachers.

His approach inspired me.  He was gracious enough to help me work through confusing issues in classes that he didn’t teach, and he almost always approached the issues the same way.  He’d say something along the lines of, “Oh, I remember doing this as an undergraduate.  That must’ve been 35 years ago.  Let’s see, I know this is true …” and then the confusion I had would begin to unfold.

I’m not sure if this was a knack he had, or if it was intentionally developed over time.  My suspicion is that he just thought this way.  His Bachelor’s and Master’s degrees in math were from MIT, and his Doctorate in math was from Stanford.  He was undoubtedly brilliant.

Here are the elements that I took from him, again in no particular order.

The last professor that I’m openly stealing from is Dr. Daniel Madden.  I had the pleasure of taking several courses with Dr. Madden, including a joy of a course called, “Formal Mathematical Reasoning and Writing.”  It was basically a Real Analysis class with a fluffy name.  That course, however, was a gatekeeper of sorts.  It forced many people to change majors and was reported to be the course with the highest failure and retake rate at the university.

A major part of the grade in that class came from proving the Heine-Borel theorem.  I’m not a good mathematician, but I have a good capacity for remembering large amounts of seemingly unrelated and nonsensical information.  Unfortunately for me, that’s what this theorem really was.  (I do wish I could go back and take some of these classes again, with what I now know about learning.)

It was my impression that Dr. Madden took it as a personal challenge to make sure that anyone that passed his classes did so based on the merits of their mathematical understanding and ability.  His tests were difficult because they forced students to think and apply their understanding in new ways.  I often saw him doing problems himself in his office.  I didn’t understand why at the time, but I have a theory now.

When I do the problems that I assign to students it allows me to uncover pitfalls and potential hiding places for misconceptions.  I believe that’s what Dr. Madden was seeking.  For his classes I had to take tests, write proofs of things I’d never considered, write a research paper, and present the Heine-Borel theorem proof, orally!

I studied that theorem and proof unlike I’ve ever studied anything in my life.  On test day, I stepped into his office to demonstrate my knowledge.  He must’ve heard a tone that sounded like memorization void of understanding (it was there, certainly).  He stopped me, and asked if I was familiar with a statement in the latter half of the theorem.  I was.  He asked me to share what led to that statement, how was it derived.

What he did there was make sure I really understood.  He wasn’t going to let me off of the hook, I wasn’t going to use blunt force memorization to achieve a high grade.  I was going to have to demonstrate understanding!  I was able to answer his question to his satisfaction.  The thing that shocked me was that he had different questions for each student.  He would watch and listen, guess where they might be weak, and explore that potential weakness.  Doctor Madden is certainly personable and kind enough, but always had a pretty strong professional distance compared to the other two.  However, here’s where he shone.

There’s one last person that works (or worked) as a teacher that I am going to mention.  She was my mentor teacher as I was doing observations in the classroom while I attended college.  She eventually became my long-distance cooperating teacher when I did my student teaching (she worked at a different school, and my cooperating teacher left mid-semester.)

Aileen Scott was not a mathematician.  She was a middle school math teacher with a limited range of mathematical understanding.  But, she did KNOW, intimately well, what she was teaching, where it would go in the future, and how to create buy-in from students.

Aileen had a force of personality that was a perfect balance of “the carrot,” and “the stick.”  That is, she was encouraging and helpful, but students knew better than to resist too much, because the stick was never far from reach.

Perhaps the key was that everything she did, and everything she expected of students, was tempered with objectivity.  There’s a purpose and goal in class, and everything that everybody in that class does needs to serve the goal and purpose.  Her classroom management was superb, both in her honors classes and her low-level classes.  And her students performed well.

Mrs. Scott was a superior teacher, in a category reserved for her and one other (non-math) teacher I have witnessed.  Here’s what she did that was special.

There’s one common thread between all of these people I’ve mentioned.  When their students moved on into other classes, they stood out.  When I taught Freshmen in high school, I could almost immediately tell who was taught by Mrs. Scott and who was not.  When I moved on from Ms. Jimenez’s College Algebra class into a Pre-Calculus course, I was so well prepared that it felt that the class had little to offer.  I saw the new material as an extension of what I understood.

It has been my goal to work to continually improve as a teacher so that perhaps I could provide the educational experience for other people that these fantastic educators provided for me.  I cannot, nor do I want to, be them, exactly.  As teachers we all need to use our personalities and instincts to their maximum efficacy, to bring about the desired goal, providing a quality education for our students.

That quality education has nothing to do with factoring polynomials or understanding what causes World War 1.  A quality education develops critical thinking, perseverance, creative problem solving and confidence.  The overwhelming majority of my experiences as a student approached it all backwards.  This handful of teachers reached me though, and the experience changed my life’s path.  I can only hope that I can do the same for some of my students.