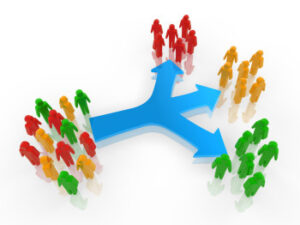 Factor by Grouping is a method that is easily applied when there are four terms in a polynomial.  The structure of this method directly relates to how distributing binomials works.  This will be the last method of factoring we will learn in this section, though more factoring methods will be learned in the future.

The take-away here, the clue, is that if you have a polynomial with four terms that you need to factor, try this method!  Factor by grouping is very powerful and simple, once you see and understand how it works.

It is easy to start thinking that all factoring fits into neat little patterns.  The truth is that there are many different patterns, combinations of those patterns, and a lot of unfactorable expressions.  The practice problems and examples are all patterned because you’re learning how those specific patterns work.  Today is one more pattern, the last we will discuss for now.  In the future you will learn some other methods of factoring.

Since factoring can be thought of as un-distributing, let’s start with the distribution of two binomials.  Let’s do this the old tried-and-true method, where we set it all up as distribution, NOT using the short-cuts learned with FOIL.  You’ll see why, soon.

The method, “by grouping,” means we will create two groups.  There are three key things that deserve great focus when using this method.

The last step is the most difficult to understand initially.  Let’s see it two different ways.

If the boxes are the same, they can be factored out.  That’s the common factor in both terms.  It is easier to see with something concrete like this:

Let’s see the initial distribution example (at the beginning), side by side with factoring.  You’ll see that Factor by Grouping is exactly the same steps in reverse order!

Give yourself a minute to recognize how the process of Factor by Grouping is perfectly opposite from distributing.

This is really the only hitch, the only potential pitfall, once you understand the process.  When you’re factoring by grouping you create two groups, both binomials.  Those binomials must be separated by addition.  This is not a big deal if the 3rd term is already positive, as it was in our first example.  But, if the 3rd term is negative, one must exercise care.  Let’s see an example.

The math written here says that the entire binomial 5x + 10, is being subtracted.  If you distributed the negative 1, you’d end up with this.

Our original expression has a + 10 as the constant term, not a – 10.  When you create the groups you cannot change the value as was done here.  Here’s now to do it correctly.

This is the same exactly value as the original expression, so we’re good to go.  Now, just factor each group, then put it together.  Here’s the thing, however.  Each of the binomials needs to be the same, so you’ll have to manipulate those negative signs to get what you need.  For example, in the first binomial, (x3 – 2x2), we can take out an x2.  This gives us a binomial of (x – 2).  We need the second binomial to be (x – 2) when we’re done factoring.  To do this, we need to take out – 5.

Putting it all together, we get the following.

In practical terms, you’re done factoring when you cannot apply any factoring methods to the expression at hand.  Here’s an example of how you might be done using factoring by grouping, but can still further factor.  It is often that factoring by grouping yields a binomial that is a perfect square, which is factorable.

Setting up our groups, carefully because of the 3rd term being negative, we get the following.

Factoring each group, we get the following.

If you’re unsure, distribute the negative one to see that it is the same as the beginning.

When we finish factoring by grouping we get the following.

This is NOT completely factored.  The first binomial is a difference of squares, and those are factorable.  Let’s review, briefly.

The standard form of a quadratic expression is ax2 + bx + c.  When a = 1, the easiest way to try and factor is to determine if there are a pair of numbers whose product is c and whose sum is b.  In a difference of squares, b = 0, and a is a square number, and so is c, but they’re separated by subtraction.  So, we are looking for a number that multiplies to c and adds to zero.

That means our final factorization for  will be

While we’re on the topic, let’s have another example of a difference of squares.

This is NOT quadratic, but it is a difference of squares.  The first term is a square,

The second term is a square number, too, 52.  So the factoring would be as follows.