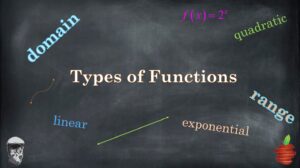 This page introduces four key functions types used frequently throughout Algebra and Calculus classes.   On this page you’ll learn what they are, and their key features.

You’ll also learn how to identify each function type from the other types from a table, from a graph, or from an equation (written out in function notation).

Work through the information in the tabs below.  Read the notes in the first tab, then watch the video, then try the practice problems.

At this point you should be able to determine if a relation is a function and understand some basics about inverse functions.  One of the next things to learn is a handful types of functions.  There are four function types we will discuss in this section.  But, as has been the case, there are a lot more types of functions and further applications of what we’re learning here.  This is just an introduction intended to provide you with a solid foundation.  With a solid foundation you should be able to easily learn those more advanced topics when they arise.

These functions will be represented in three different ways.  You must be able to identify features of each function from all three of the representations.  The ways you’ll be seeing these functions are as follows.

Graph:  Linear equations form lines when graphed.  If the graph you’re looking at is curved, it is not linear.

To determine the type of function given an input / output table you examine the differences between consecutive outputs.  Here’s an example.

The difference of consecutive outputs is what we will refer to as the “change.”  If the change is constant, then the function is linear.  Here’s why.  Linear equations have a constant slope.  Slope is of course, “rise over run,” but it’s more.  One way to think of it for now is that slope describes the change between consecutive outputs.  A line has a constant change between any two points.

Domain and Range:  There are all linear. The first is the most typical.  As you can see, the graph goes up and to the right, extended off of the plane.  This means the pattern will continue that way.  The graph also goes down and to the left.  That means that any value can be used for x and every number will also be an output.

Most of the time a linear equation has a domain and a range that is all Real Numbers.  There are two exceptions, and an example of each is shown above.  If the line is horizontal or vertical, it will have a different domain and range.

Let’s talk about the middle graph, y = 5.  Remember, that a line is an infinite collect of points.  Each point is a coordinate.  Each coordinate has an x and a y.  The x is input, domain, and the y is output, range.  For this graph, all of the coordinates on that line will have a y – coordinate of 5, nothing else.  So the range is just 5.

However, the domain is all Real Numbers, because the line extended infinitely to the right (positive) and to the left (negative).

If the second change is constant, then the function is quadratic.

Domain and Range:  The domain for a quadratic equation is always, “All Real Numbers.”  The range is a little trickier.  At this point in your understanding you probably do not know much about parabolas, including how to find the vertex (or minimum/maximum).

Look at our two graphs.  The first one is going up.  The minimum output is -2, as shown on the graph.  The range is then -2 to infinity.

The second graph is going down.  It’s maximum value is 32.5.  So the range there is negative infinity to 32.5.

Graph:  There are many variations of cubic graphs, at least compared to what we’ve seen so far.  Here are the key features to look for, for now. A cubic function will have no more than 3 x – intercepts (where the graph crosses the x – axis), and could be described as either going up to the right and down to the left, or down to the right and up to the left.  We can refer to them as a funky, sideways S shape.

Domain and Range:  This is the easiest of all of them.  The domain and range for cubic functions, for both, is, “all Real Numbers.”

Biggest Exponent:  Here, the input is the exponent.

Graph:  There are many variations to these graphs, and the topic is fairly nuanced.  Here are three examples of what an exponential function might look like.

However, there are no boundaries for the inputs.  You can use any number you like for x in an equation like y = 2x.  Now, you might be a sharp cookie and notice that if x = ½, we end up with two outputs, a positive and a negative.  However, we limit the outputs in this situation intentionally.

You will NOT find a constant change from an input output table if the function is exponential.

Domain and Range:  Because we can use any input we desire the domain is all Real Numbers.  The range is a little trickier, however.  There are ways to determine the domain through an Algebraic examination of sorts, but that’s beyond the scope of our abilities at the moment.  If you’re asked for the range of an exponential function, you’ll have to examine the graph.  Remember, the range is the set of all possible outputs.