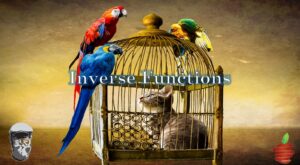 Read through the notes below, watch the video, try the practice problems.  Then, you should have a solid understanding of the basics of inverse functions.

A function and its inverse have a special relationship.  If a function has an input of A, and an output of B, then the inverse of that function will have an output of A if the input was B.  That would work for any input and output combination.

So, for example, consider the function below.

If we were asked to solve the following for the value of x, we could apply what we know to be true about inverse functions.

Two functions are inverse if their composition both directions results in an output of x.

Let’s look at an example.

These two functions are inverse IF

That means that if you perform the composition of functions in both directions, the result is x.

Because the composition both directions is x, these are inverse functions.  We could then write:

If you’re given a function and asked to find its inverse, you can apply a few approaches.  In the function is simple, like the examples we used to define inverse functions, you can just figure it out by applying the inverse operation.

For example, if h(x) = 3x, the operation is 3 multiplied by the input.  The inverse would be the input divided by 3.

We can verify this is an inverse by performing the composition both directions and having a resulting value of x.

Here, the order of operations is times 8, then plus 1.  If we invert this, we subtract one first, then divide by eight.  We need to write this “subtract one first,” as a group to preserve that order.  Here’s how:

If things get much more complicated it would be best to have a simple procedure.  Here’s what we do, and why.

Let’s see an example.  Verify if the functions below are inverse.

We must perform the composition both directions and see if the result is x, for both.  Let’s start.

Now, let’s verify the other direction.

Because the composition of functions in each direction resulted in an output of x, these functions are inverse functions.