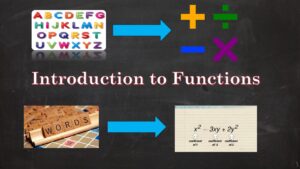 On this page you’ll find the fundamental ideas required to understand what functions are, and are not, how they’re used, and how to read and write with function notation.

Navigate the information shared with the tabs below.  Start with the notes tab, then watch the video, then try the practice problems.  Should you run into trouble, please do not hesitate to reach out via email.

Introduction:  What mathematics needs is more metaphors.  For you “mathy,” sorts, a metaphor is a non-literal application of an idea.  A terrible example I stole from the internet is,

“The little boat gently drifted across the pond exactly the way a bowling ball wouldn’t.”

If mathematics is a human language, then arithmetic is similar to the alphabet.  Knowing your basic arithmetic facts, add, subtract, multiply and divide, is like knowing your ABCs.

Words would be like polynomials, or exponents, or square roots.  There are embedded pieces of information that are noted with spatial arrangement of characters.  For example, 5(x – 3) is actually just one number, which is the product of two numbers.  The product of five, and whatever is three less than x (an unknown value), is what this number is.  So, this number has two factors, five, and three less than x.  But, three less than x is a single number!  That might be new, which would make it confusing.  That’s okay, you’ve likely not seen polynomials in-depth yet, which is when you’ll learn to unpack all of that information.

The point is that terms (parts of an expression or equation separated by addition, subtraction, or equals), can contain more information than just a single number.

Equations are like sentences.  For example, x – 2 = 7, is a sentence.  It says, “An unknown number minus two is seven.”  There are other, perhaps more practical translations, but let’s not over labor the point any more than we already have.

So if the ABCs are arithmetic, words are terms, equations are sentences, then functions are like paragraphs.

The information you’ll learn about functions is NOT discoverable.  They’re a matter of convention, agreed upon rules and notation.  This is about learning to read and write mathematically.  So, if you’re looking for a set of steps, you’ll miss the point.

What you’ll learn in this section is:

A function is a mapping or pairing of an input to exactly one output.

Let’s take a look at what that means, and then we’ll learn how to read and write with functions.

Input and Output:  Input is often said to be the variable x, the independent variable.  The set of all possible inputs creates what we call the domain.  The input doesn’t have to be x, and often is something else entirely.

Output is often said to be the variable y, which is the dependent variable.  The set of all possible outputs creates what we call the range.  The output doesn’t have to be called y, but it will be the y – axis on a coordinate plane.

Mapping or Pairing:  This is a confusing phrase.  What it means is there is a linking between the input, and output.  There’s a rule or association, or set of procedures, that will connect the input to the output. Let’s look at a few examples of pairing.

Example 1:  We could say the range of our function is the capital letters of the alphabet.  Since there are 26 letters in the English alphabet, our domain is 1 through 26.  We could demonstrate the function in an input/output table, like is shown below.

This is a function because each input has exactly one output.  We could call this a pairing just to help make sense of the definition of a function.

Example 2:  Another type of function involves some mathematical work.  Let’s say the set of all possible inputs (domain) is any Real number.  Let’s say the output is the input (x) plus three.  We could write this as an equation.

This could be shown in a table form, like we did with the alphabet.

It could also be shown as a graph. (This graph was taken as a screen shot from Desmos.)

Sometimes the input and output relationship is shown in a form like this:

Non – Example 1:  Let’s adjust our first example where each capital letter of the alphabet was assigned a number based on its place value.  Let’s say that the domain is still 1 through 26, but now the output is capital and lowercased letters.  So, 1 would be paired with A and a.  This is NOT a function because an input has more than one output.

Note:  It only takes one input from the domain that have more than one output for the relation (or mapping or pairing) to not be a function.  It can still be mathematical, and still be valid, but it won’t be a function.

Non – Example 2:  Let’s look at another function, similar to before.  But now, the output is the square root of the input.  In an equation, this would be:

This is NOT a function because every Real Number, except zero, has two square root values.  One is positive, and one is negative.  The square root of four is the number squared that is four.  That could be two, but it could also be -2.

Notice how each input, except zero, has two outputs.  You can literally draw a vertical line at x = 6, and your vertical line will cross the graph twice.

Also notice that the domain is the set of Whole Numbers.  We will dive into this more deeply in a future section.

This photo is from Quora.

In this diagram we can see the inputs on the left and the outputs on the right.  See how the input of three has two outputs.  That means this is NOT a function.

Note:  An output can be repeated, and not all inputs need to have an output.  Those are some special cases of functions we’ll discuss later.

Summary:  Let’s look at the definition again and make sure we understand.  It is important because one of the most common questions you’ll be asked will be to determine if a relation is a function or not.

A function is a pairing or mapping of an input to exactly one output.

To determine if a relation is a function or not what you’re doing is verifying if each input has exactly one output.  This is easiest to do visually, from a graph.  If you can draw a vertical line any place on the graph and it crosses the graph more than once, it is NOT a function.  This is called The Vertical Line Test.

Notation is how we write mathematics.  What we are going to see is how functions are written, what they mean, and learn how to write them.  There’s quite a lot of notation to cover, but we will just cover the very basics in this section.  We’ll learn about the “other stuff,” in the next section.

Example 1:  Functions have names.  Sometimes they’re just a letter, like f, but sometimes they have a name like “sine.”  Here’s an example.

The name of this function is f.  We assume that the input, x, is any Real Number.  Each input would have exactly one output, which is three more than the input, so this is in fact a function.  Because the value of y is dependent on the initial value x, we say, “y is a function of x.”

If we graph a function on a coordinate plane, the input is the horizontal axis (x) and the output is the vertical axis (y).

We have our function f (x) = x + 3.  Whatever is written inside the parenthesis next to the f is NOT multiplying with the f.  What it means is to plug in the value in the parenthesis in place of x (or whatever symbol is used).

Example 2:  A famous function is the trigonometric function called sine.  For the function sine, the input is an angle from a right triangle and the output is the ratio of the opposite side of the triangle and the hypotenuse.  Like all things, it gets more complicated than that, but for now, it’ll work.

In trigonometry we use the Greek letter “theta,” as the input.  Theta looks like this: θ.

We find the values of the opposite and hypotenuse from exploration.  We can construction any acute triangle and know the lengths of the sides.  The information that is important here is the function notation.  The domain is any acute angle, and we use “theta” to represent that.  The output is a ratio of side lengths from the triangle with that acute angle.

The inverse of sine would take the ratio of sides as the input and produce the appropriate angle as the output!

Notation:  The three expressions below are all significantly different.

The middle expression means inverse function.  The other two expressions are using a negative exponent, which means the same as the division symbol.  Those are requiring multiplication by the reciprocal.