Reading and Interpreting Graphs of Functions 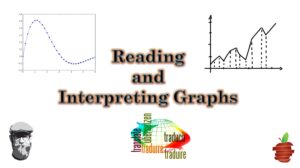 The concepts at play are simple.  A function has exactly one output for each input.  A graph is a picture of all inputs and outputs, with y representing the output and x representing the inputs.

Yet, to read a graph and glean information from it about the function requires a little thought and consideration, at least initially.

That’s what this page is all about, helping you learn how to read and interpret graphs.

Start by reading the notes, then watch the video.  Try the practice problems to test your understanding.

In this section we will discuss making sense of function notation and graphs.  This is not a mathematically complicated, difficult or particularly confusing topic.  Instead, what makes it tricky is learning to read both the notation and a graph.  To help with that, let’s lay some ground rules here, well, establish some definitions.  If you forget what any of these mean, please refer back to the official definition.  Also, keep in mind, your understanding of these definitions will change as you begin to better understand the details and relationships.

These definitions are not precise, but rather stated in a way that is both correct, but also particularly useful for the particular applications to follow.

Function Notation versus an Ordered Pair

If you saw, evaluate f(5), it would mean, plug in 5 for x and see what the output would be.  But, what if you didn’t know what the function was exactly, but instead, had a graph?  Do you know what to do?

Given the accurate graph of f(x), find the following values.

To answer these questions, we need to understand the notation.  In the first two questions we need to realize that even though we don’t know the function, we do have its graph.  A graph is a picture of all solutions, or pairings of inputs and outputs.  When we see f(1), 1 is the input, the x – coordinate.  We can use that on the coordinate plane to find the y.

If you’re given the input, and asked for the output, this is exactly how to find it.  Just use a ruler (or just look if it is a simple graph), to find where on the graph x equals the input, then trace that over to the y – axis to find the output value.

The other question, where you’re given the output and need to find the input is a bit trickier.  Remember, a function has exactly one output each input, but it can have inputs can share an output.  Consider y = x2.  If x = 2, or if x = -2, the output is 4.  That is still a function because each input has only one output.  But, it gets tricky on the graph.

Do you see the range of values on our function of x where the output shares three inputs?

Our last question asks for the value(s) of k, as in f(x) = k, that has two values of x.  Do you see now that there are actually two values of k that satisfy this question?  The first value is at 2.9 (-ish, our coorindate plane has increments of 0.1, which is not accurate enough for us to tell precisely).  The other is at y = -4.1 (ish).

A coordinate plane can be used to graph more than one function at a time.  For example, sometimes this done with a system of equations.  We can use the graphs to find where the two functions are equal to each other, even in situations where we may not possess the algebraic skills to do so without the use of a graph or a calculator.

What you might see is a question that says:

When talking about minimums and maximums the y – coordinates, or outputs, are the values of importance.  So, a minimum or maximum is directly related to the range of a function.  The function f(x) = 3(x – 2)2  + 9, has a minimum value of (2, 9).  The output, y = 9, is the lowest output of that function.  This type of a minimum is sometimes called the absolute minimum value.  There will not be a smaller output.  The range will be 9 to positive infinity.

With some functions there is NOT an absolute minimum or maximum, but there are local minimums and maximums.  Consider the function
g(x) = x3 + 3x2 – 2.  This function is graphed below.

There is a local minimum at (0, -2).  To the left of the point, the graph is decreasing (going down, as read from left to right), and to the right of the point the graph is increasing.  The local maxima and minima do NOT change the range.  The range of this function is all Real Numbers.

The graph on the left is of a tangent line.  It intersects the curve at exactly one point (locally), and that point is called the point of tangency.   The graph on the right is a secant line, it crosses the curve twice (locally).  (Locally means in the general area.)