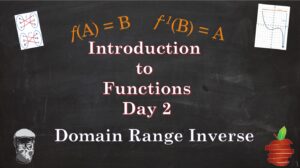 On this page we will introduce some key ideas that will play important roles with functions.  This is just an introduction, a framework or foundation for future and more in-depth learning.  Often, when the details are discussed, it is at the expense of the big ideas.  This is just the big ideas!

Work through the tabs below.  Read the notes in the first tab, watch the video, then try the practice problems.  If you have questions, please don’t hesitate to reach out via email.

In the previous section we introduced a lot of new information.  In this section we are going to take a closer look at a few important concepts that might get lost.  That is, as we move through the topic of functions, we will focus on some new properties, notation and ideas.  Inverse functions, domain and range often get forgotten by students.  That is, students forget the basics which makes taking the next steps very difficult.  So, this section is a chance for you to develop a conceptual understanding of these important, and often elusive, ideas.  This way you will understand and if you understand, you’re more likely to remember in the future.

Let’s work through some examples that will reinforce your understanding of four things.

Other than the first objective, these get quite complicated and nuanced as you move through higher levels of mathematics.  Similar to how the Order of Operations isn’t just a topic, but is in all of mathematics, functions are used throughout mathematics.  When you learn Calculus, functions are a huge part!  Domain and range, and inverse functions are massively important concepts.  If we can learn them now, when things are simpler, it’s less of a jump later.

Not all relations are functions, but all functions are relations.  A relation just compares two things in math.  A few examples are y = x, or y < x.

A relation is a function if each input has exactly one output.  Do you know why y < x is NOT a function?   How many values of y would be true if x was 5?  Infinitely many.  That’s more than one output (y) for one input (x).

The graph has an arrow on top, which means that the pattern continues.  Do you see the pattern between the coordinates shown?  It seems like this might be y = x2, but there are no values of x less than zero!

Each input shown has only one output, and the arrow suggests that the pattern continues.  So, this is a function.

Domain is the set of all possible inputs.  This can be tricky to determine.  Sometimes the easier question is, “Is there a value for x that does not have an output for this function?”

The graph doesn’t show anything less than zero for x.  While the graphed curve is increasing, it is also slightly pointing to the right, which means it will continue having larger values for x.  So the domain here is all numbers greater than or equal to zero.

Note on Notation:  There are different styles and notation structures used to list domain and range.  We will not be discussing those yet.  The focus here is on developing the understanding of the concept of domain and range, and how to find each in simple cases.

Range is the set of all possible outputs.  To determine this from a graph we need to look at the set of all of the y – coordinates on the graph.  The smallest y – coordinate, called the minimum, is 0.  The graph is increasing from there, so the range is all numbers greater than or equal to zero.

A function’s relationship between the input and output is inverted for the function’s inverse function.  There is a lot going on with inverse functions, as there is with domain and range.  In future sections we will get deep and more technical with functions, but our goal here is to develop a working understanding.  It is too easy to get lost in the procedures and technicalities later and lose sight of the meaning.

Let’s look at our set of inputs and outputs, and make a list of the integer coordinates.

For our inverse function, we’d have to swap the input and output.

Is there a function that has this relationship?  What about

Our original function is actually

with the domain intentionally restricted to be x ≥ 0.  Our inverse function is

with the outputs restricted to be greater than or equal to zero.

This relation is a function because each input has exactly one output.

Here the domain is limited.  In the previous example, we had a curve. That means there were infinitely many inputs and outputs.  Here, we have just four inputs and three outputs.

To find the inverse we switch the input and output.  We’d end up with the following.

Do you see that the inverse is NOT a function?  The input (to the inverse function) of four has two outputs.  The reason this happened is because the function was not a One to One function.

Let’s talk about dividing by 3.  Is there any number that can cause issues when dividing?

That’s why this is zero:

And this is undefined:

There is nothing times zero that is equal to five.

If there is a value for x, that makes the denominator equal to zero, then we have a value missing from our domain.  Do you see that if x = 5, this function is undefined?  That means, the domain is every Real Number except 5.

We skipped the range on this example because it involves math beyond what you’re able to approach, at this time.  It isn’t too complicated, but involves a lot of new ideas that are foreign to you right now.  When the time comes, this will be easily understood.

You may have a little difficulty determining if this is a function or not.  To approach the question, start with what you know.  What is x, here?  Do you see that it’s an exponent?  The base is two.

Is there an exponent, for a base of two, that has two answers?  All of the integers are fine.  23 = 8, and 2-2 = ¼.  But what about the case where x = ½?  Remember than exponent of ½ is the same as square root.  The square root of two has a positive and negative value!  Therefore, this is NOT a function.

Strangely enough, if you graphed this function with graphing software, it would pass the vertical line test.  The reason is that graphing calculators typically limit outputs (y values) so the graphs stay neat and easy to understand.

The domain is all Real Numbers.  You can place any value you want for x and raise 2 to that power.  The range is subtle.  While we know the graph doesn’t show all outputs for the equation y = 2x,