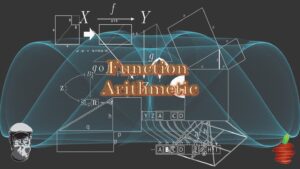 Functions can be combined with addition, subtraction, multiplication or division.  There is also a way to combine them called composition of functions.

On this page you will learn about function arithmetic.  The procedures are pretty familiar, you probably know all of that math already.  The notation, which is the instructions written in the language of mathematics, is a bit tricky.  If you know the details, it will be super easy!

Read through the notes section below, then watch the video.  Try the practice problems and you should have a good foundation!

The four arithmetic operations are: Add, subtract, multiply and divide.  Arithmetic can be applied to functions.  So, you can add two (or more functions) together, or any of the other operations.  The procedures themselves will not be new territory, you’ll already know what to do once you get there.  The problem is reading and understanding the notation.

Notation is what’s used to communicate information in mathematics.  An exponent is a superscript (small print to the top right of the base number).  That means repeated multiplication.  The symbol + means addition.  These are types of notation you know well.  With functions there are a few different stylistic ways of writing the arithmetic, but they all have the same general idea.

For all of our examples, let’s use these two functions.

They both mean the same exact thing.  Take the two functions and add them.  The perquisite skill you need is the ability to identify and combine like terms.

Note:  The first notation looks like x is being multiplied by the two function names.  Just remember, x is the input, and both functions share the same input of x.

Let’s see how the math would work out.

Note 1:  If you didn’t use the parenthesis here, you’d still get the right answer.  But, use them as a matter of habit because they preserve relationships and meaning.

Note 2:  If you wrote 3x – 2 + x2, it would still be correct.  But, it is a best practice to write answers in descending order.  For now, that just means to put the terms (and its coefficient), with the largest exponent first.  When you get into polynomials you’ll learn more specifics about descending order.

The notation for subtraction is the same as it is with addition, except with a minus sign.

With addition, the order didn’t matter, but with subtraction it does.  For example, 5 + 3 = 3 + 5, but 5 – 3 ≠ 3 – 5.  Here we set it up, with the parenthesis (you’ll need them frequently with subtraction), distribute the negative one, then combine like terms.

Let’s see what it would look like the other way.

Note:  When rearranging these terms be sure to keep the signed values of each coefficient the same.  Here’s a common mistake:

Depending on your level of mathematical ability, you might not yet know how to multiply binomials together.  A binomial is a polynomial (Algebraic expression with variables) with two terms.  Both of the functions we are using are binomials.  Because of that, we’ll take a look at two examples.  To start, let’s use our functions f and g.  Here’s the notation.

If you know a quicker method for multiplying binomials, it is a good idea to use that method.  But if it is new, then learning what’s really happening so you can understand before learning tricks is best.

Let’s see an example that uses a simpler level of distributing.

You can change the order when multiplying, so we could write (6x)(5x – 1), which is a simple distribution.

There is a lot more to division than we’ll cover here.  Our goal here is to introduce the basic idea and notation.  At this point you can probably guess how that’ll look.

Here, the order matters.  Also, until you learn how to divide polynomials, all that you’ll be able to do is reduce (if all terms in the numerator and denominator share a common factor), and state the value that the input of x cannot be.  Let’s take a look at two examples.

Here, there are four total terms, two in the numerator, 3x and 2, and two in the denominator, x2 and 1.  The four do not share a common factor, so it cannot be reduced.  Here, the denominator can be any Real Number.  Remember that you cannot divide by zero, but there is no value of x, except the square root of -1, that would make the denominator zero.

We have the same situation with reducing.  It cannot be reduced because there isn’t a common factor between all terms.

There a missing value in the domain.  (Domain is the set of all possible inputs.)  Because you cannot divide by zero (it is not a number, it is literally undefined mathematically), x cannot be 2/3.  Here’s why.

Since 2 – 2 is famously known as zero, and it is in the denominator, then the domain is all Real Numbers except 2/3.

Here’s how to find the exception (missing value) in the domain when dealing with division or rational equations.  Because you cannot divide by zero, we want to find what value of x would make the denominator zero.  So, take the denominator, set it equal to zero, and solve for x.

Add two, divide by three, x = 2/3 is the value that would make this equal to zero.

You will often be asked to evaluate the arithmetic of two functions at a given value of x, or something similar.  Here’s what that might look like.

There are two ways to go about figuring this out.  You could either add the functions together, then plug in x = 5, or you could plug in x = 5 into each function first, then add those values.

Or, you could add the functions first, then plug in five.  We added them already and found the following:

Summary:  Reading the notation is the trickiest part because it looks like multiplication.  However, this is function notation.  The variable in the parenthesis after the function is the input.

Division is reducing and stating the domain.