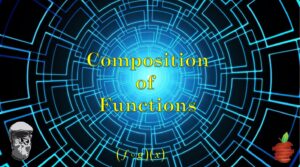 The composition of functions means that one function is used as the input for another.  That is, we plug an entire function in as the input and end up with something called a composite function.

Composition of functions is used to verify if two functions are inverse of each other.  The math involved here can be a little tricky, but can also be very simple and straight forward.  The notation is new, making this topic deserving of some time and careful attention to detail.

Read through the notes below, watch the video, then try the practice problems.

Function notation is handy because the input is written in a way that it is easily recognized.  For example, h(3), means that for the function named h, the input is three.  To this point, the inputs we’ve seen have been limited to numbers, but they could be algebraic expressions like 3x.

The concept is not any different, but sometimes when the application is unfamiliar it feels that we don’t understand what we’re doing.  But if we rely on what we know to be true, we can apply our knowledge to new things, like the example above.

When a function is the input for another function it is called Composition of Functions.  There are a few ways the notation can be used.  Let’s defined two functions and then look at how the notation can be written.  It varies depending on location.  Remember, math is a written language and like all living languages, there are stylistic and regional variances.

The first two ways you can see the notation are easy enough to read.  As is always the case with function notation, this is NOT multiplication even though it might look like it.  The first variation is a direct application of how the notation for inputs works.

The second variation has a small open circle, located in the middle (height-wise).  It looks like a degree symbol, but is not at the top.  This means composition.  The second function is the input for the first.

The last variation is a style that is used internationally.  It is a very confusing style as it looks like the functions are multiplying.  Compare the two different notations below.  One is multiplication and the other is composition.

If you live in the United States, you’ll be unlikely to see this notation unless you’re taking an international curriculum.

Convention is an agreed upon meaning, like a red light means stop, green means go, and often yellow means, HURRY!  The notation we use for composition of functions means that the second function listed is the input for the first function.  So the following are different.

Let’s see why they’re different, just to be 100% clear on this point.

Just like with other function operations, you can evaluate the composition of functions at a given value.

Sometimes, to simplify the notation, a new function will be named as the composition of functions.

This is entirely the same as the prior example, but the composition of functions has been named as a new function.