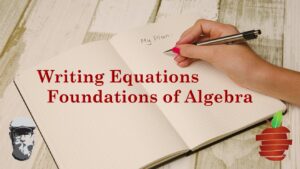 The ability to take an idea or some information and write a statement clearly and coherently is a huge part of literacy.  Without literacy, mathematics is just a bunch of random steps and problems.  With literacy, it becomes a human language, and what’s done in math because sensible.  So yeah, it’s kind of a big deal, right?

This is NOT a one-off topic, but instead a huge part of what should be developed throughout all math classes.  We pay special attention to it here as it is a fundamental component of Algebra because Algebra uses the linguistic structure and rules of mathematics to uncover hidden meaning.

In the tabs below you can find notes, lessons, practices problems, and a video.  This should help get your feet on the ground, so to speak, with the skill of writing equations.

Mathematics is a written language.  If you want to be good at math, you must be able to write, in the language of math.  Makes sense, right?  Also, it sounds easier than it is.  This section is written to help you learn to quickly and effectively write mathematically.  This skill will translate to all areas of mathematics, but also help you outside of math class.  Let’s get to it.

Math is About Relationships and Operations

We’re not talking Romeo and Juliet, or whoever is on the cover of the latest gossip magazine.  But math is really powerful because it shows when things are the same exact size, or when one is larger than another.  Simple enough, right?

If you see the word, “is,” or “same as,” that means equals.  And of course we use the symbol = to mean equals.  That symbol wasn’t always used.  In fact, a lot of math symbols are fairly new, compared to how old the ideas in math are, like equals.  The equal sign was invented in 1557, by Robert Recorde.  That’s neither here, nor there, but is mentioned because the symbols are invented and developed over time to represent ideas.  That’s not at all unlike how we agree that the letter c sounds like it does in Pacific Ocean … oh, wait.  That’s a bad example.  Every letter c in the Pacific Ocean sounds different.  Let’s stick to math!

You probably already know all of these symbols and their translations, but here they are anyway.

Armed with this information you should be able to translate from English to math, and math to English.  A few examples are:

Example 1:  Two consecutive odd numbers have a product of 195.  Write an equation that could be solved to answer this question.

First off, did you notice the instructions?  We are not interested in guessing until we find the answer.  We are developing our ability to write mathematically.  This situation is tricky because we have two different numbers, but only one statement.  Without getting into this too deeply, if we have one equation, we can only solve it if we have one unknown.  We need to write this with one variable.

This is also tricky because we have to write a generic odd number, and then the next odd number.  How do you write an odd number with math?  In English we can use the word odd, or describe it.

Okay, but what are even numbers?

Even numbers are divisible by 2.

All numbers divisible by two have a factor of two.  So, the product of two and any other whole number is even, right?  If we say the letter n represents any whole number, then the number 2n is even!

Would this be an odd number?

Check to make sure you understand that 2n – 1 is odd.  Plug in whole numbers for n.  Does it always work?  If so, why?

What about the next one?  What’s the next odd number after 7, and what’s the relationship between those two numbers?

The situation described says that two consecutive odd numbers have a product of 195, and we’re supposed to write an equation.  We’re not asked to solve it, just write it.  How can we write multiplication for these numbers?

This is wrong because this only has a – 1 and a 2n multiplying.  We need the entire numbers to multiply.

That’s it right there.  It works perfect because we have the product of two consecutive odd numbers that equals 195.  Whether you know how to solve that or not, at this point, is irrelevant.  If you’re following along with this curriculum from beginning to end, you will not yet have the skill to solve it yet.

Example 2:  Write a number in terms of n that when divided by 3 has a remainder of 2.

Try and apply what we did in the last section to write this.  At the end of this document you will find the answer.  Here’s a tip.  Don’t look specifically at 2n + 1, but instead, how we used the facts about even and odd numbers to arrive at that expression.  You have to really understand what it means to have a number with a remainder of two when divided by three.

In the previous two examples you saw how difficult it can be to write a simple description in mathematics.  It gets easier with practice, but it is still tough.  Formulas describe situations in math perfectly.  In the previous section on rearranging formulas we saw how the temperature conversion formula works.  That formula is a description of the relationship between the scales of temperature Fahrenheit and Celsius.

The Pythagorean Theorem is a description, mathematically, of the sides of a right triangle.  If you make squares from each side, the areas of the smaller squares combined is the same as the area of the largest square.  The largest square comes from the hypotenuse because that’s the longest side.  It is the longest side because it is opposite of the largest angle, 90°.  All of that is captured in this little equation.

If you are answering a question or tackling a problem that involves a formula, your first step is to write the formula.  Writing the formula creates the structure on paper that reflects the situation described.  It keeps your thinking and working on track.

It might be tempting to skip writing the formula here, but that’s a bad habit to break.  So, just start right, every time!  Then, when you NEED to start right, you’re already in the habit.

All that needs to happen is that the values are plugged in.

Mathematically, we can divide all terms on both sides by centimeters to arrive at an answer.  But, x is a unit in centimeters, so we cannot forget that.

What if, instead of that question, you were provided with one more clue and asked a different question.

Perimeter was your clue to finding the value of x.  Once you have the value of x, you can find the length of each side, and the height. Here’s the formula for the area of a triangle.

For this formula to work the base and height must be perpendicular.  This is NOT a right triangle, but we do have the perpendicular height (2x cm), to the side whose length is 5x – 1 centimeters.

The clue for finding the value of x is that we are given all sides and the perimeter.  We can then use that value of x to find the base and height.  We can then plug those values into the formula for area, do a simple calculation and, boom, done.

Pro – Tip: Use all information provided.

You’ve most likely heard this before, but do you really understand why it is such great advice?

The purpose of this topic is to help you learn to read and write mathematically, and how to translate from picture or English, into mathematics.  Consider that you were drawing a conclusion in an essay in a History class.  Would it be important to understand all of the information you’ve been provided in that situation?  Of course it would be.  Without integrating all of the ideas, well, you’ll be incomplete and likely draw an incorrect conclusion.    Same here.  If you’re provided with the fact that a triangle is a right triangle, and you don’t end up using that fact, there might be an error in your thinking.  Maybe that piece of information is not super important, but likely it is important.

Also, if you ever find yourself completely stuck, not sure what to do, it is likely the case that you’ve missed the importance of some key information.  So, read, understand, integrate, and imagine how it can all fit together.