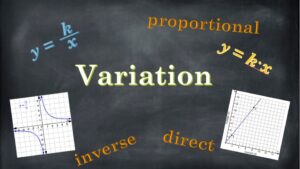 In the tabs below you will find notes, which you should read and annotate (take your own notes), a PowerPoint that can help you further understand, a video, and of course, some practice problems.   Please share this page on social media if you find it to be useful and helpful.  If you have questions, comments, or even concerns, please let us know.  Send us an email: thebeardedmathman@gmail.com

The topic, typically in an Algebra class, of Variation is an excellent way to develop the ability to read, write and manipulate equations.  This is exactly what mathematical literacy is!  So, let’s give this topic the focus it deserves.  Let’s dive into an example and see how we can make sense of it.

Since we are told that y varies directly with x, we can write the equation below.

This equation describes the relationship between our numbers x and y.  Now, we know that when y = 10 that x = 8.  Let’s plug those in and see if we can figure out what the constant of variation is.

Let’s be 100% sure that we understand what we have found.  The constant of variation, k, makes the values of y and x equal.  Therefore, the following is true.

PRO – TIP:  Do not forget to write the equation above.  This is what we use to answer the remaining questions because this is how y and x are related.

Let’s take a look at our original question again.

Even though we weren’t asked to find the value of constant of variation, or asked to write an equation relating y and x, we need to in order to answer the next question.  In doing these things what we have done is made sense of the clues provided.  Those clues are: (1) y varies directly with x, and (2) when y is 10, x is 8.  Now, let’s use what we know to find the value of x when y is 16.

Divide both sides by 1.25.  Before doing so, should x be a larger or smaller number than y?

Let’s recap what has happened.  For direct variation we begin with y = kx. Then, we plug in the values provided to find the value of k.  Next, we write the equation with the value found for k.  After that, we plug in what is provided and answer the question.  Things will get a little trickier, but this is the basic idea and it will not change.

A quick word on direct variation.  Things that vary directly grow in the same direction.  So if y varies directly with x, then as y grows, so does x.  This could be something like the more sunlight the more plant growth (within reason, of course…not always true in places like Arizona).  Another example is, as your student skills improve so do your grades.

There’s another type of variation to know. It’s called indirect, or inverse, or inversely proportional.  That means that as one value grows, the other shrinks.  For example, the more money you spend, the less money you have.  Or, the more you study, the less time you have for playing video games.

Let’s think about this for just a second.  Since they’re inversely proportional, or indirectly varied, as one grows the other shrinks.  If y starts at 10 and is now 9, it has gotten smaller.  That means that x will be more than where it started, at 8.

Let’s start with our situation, writing an equation using k, the constant of variation.

This is how inversely proportional works.  There are other ways to write this, like yx = k.  The style is irrelevant.

Now, plug in our values of x and y to find the constant of variation.

Writing our original equation, with the value of k, we get the following.

We were told that y = 9, and asked to find the value of x.  This involves a little Algebra, but isn’t too difficult, if you’re careful.

If we multiply both sides by x, we get this.

It is true there are short cuts here, but knowing this level of Algebra is beneficial.  Now we just divide by 9 and we’re done.

This is good because we expected x to be a larger value because y was smaller.

Let’s summarize what we have so far.

That’s really it.  Nothing more … except some details.  Here is an example.

The key phrase here is, with the square of x.  All we need to do is account for that fact and everything else is the same.  Here’s what it will look like. 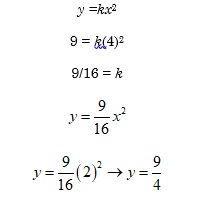 You can download a PowerPoint with this link:  Click Here.  Here are a couple of screen shots of the lesson. 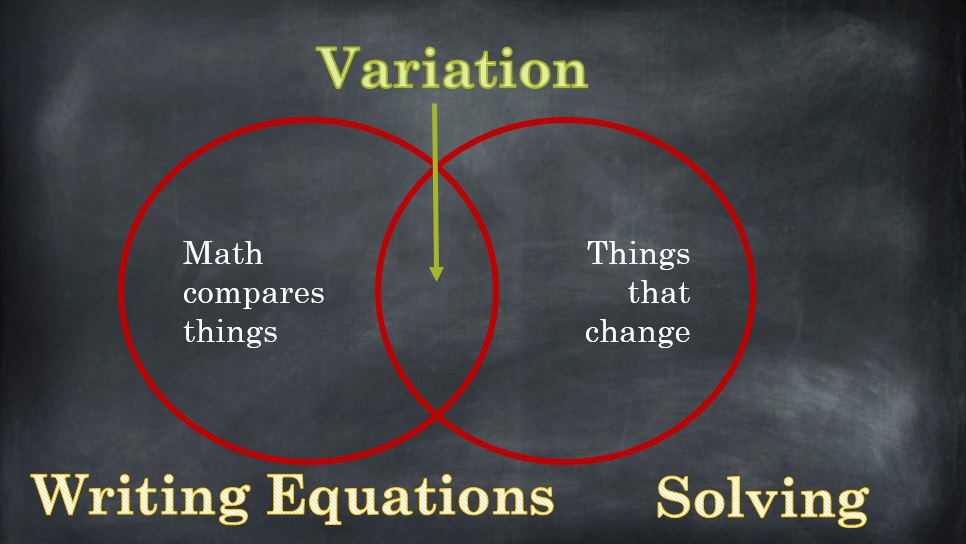 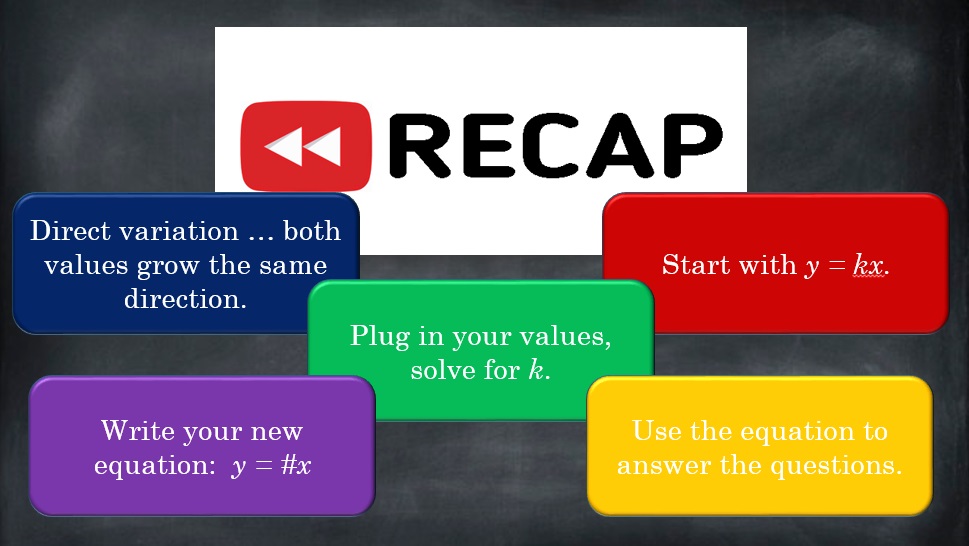 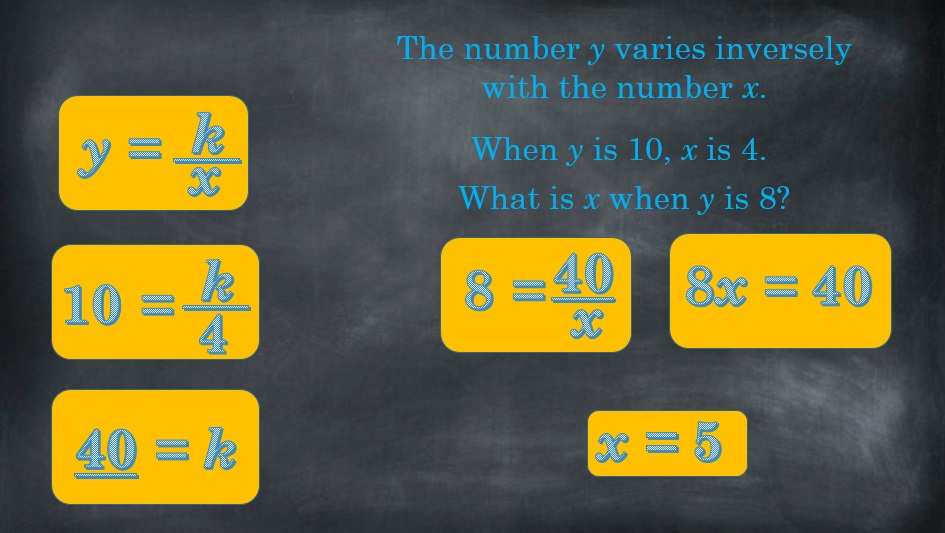