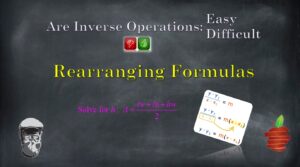 This topic is fantastic for both students that already really grasp inverse operations as well as those that struggle.  When rearranging formulas we must use Algebra, which is a manipulation of the linguistic rules of the language of mathematics.  In particular, we reverse the order of operations in order to find out what something equals.

What makes this different than solving equations like 3x – 4 = 11 is that here we cannot rely on arithmetic facts.  Instead, we are left only to be able to apply inverse operations.

There is one potentially new concept here called factoring.  Factoring is the opposite of distributing, roughly speaking.  Basically, if a(b + c) = ab + ac, then if you started with ab + ac, you could divide out the a from each term.

Read through the first tab’s notes, then watch the video. Download the PowerPoint if you like, then try the practice problems.  If you have questions or confusion, please don’t hesitate to leave a comment below, or send us an email at:  thebeardedmathman@gmail.com.

If you find this material helpful, please share it on social media.

A key aspect of ability in Algebra is the ability to decode text.  Math is a written language often used to describe relationships.  Algebra uses the conventions of the language of mathematics to uncover hidden meaning and relationships.  The conventions of mathematics we are talking about here are primarily the order of operations.  We will refer to them as PEMDAS, although there are many other acronyms.

This topic of rearranging formulas is a great way to take the next step in your Algebraic abilities.  They will come into play greatly as you move to increasingly more complicated mathematics.  The math gets more abstract, which means you can rely less on your arithmetic facts and have to rely more on your understanding of mathematics and Algebra.

Let’s look at an example of what we’re talking about here.  Below is the formula that converts temperatures measured in Celsius to Fahrenheit.

To do that we will solve for F, which is sometimes said, “Make F the subject of the equation.”  To do this we just need to apply inverse operations … use Algebra.  Algebra roughly translates to, finding resolution through regression.

It can be a great practice to start with writing out your order of operations, then writing each value on the same side of the equal sign as is your desired subject (variable you’re solving for), and notating the operation to be performed.

Remember, when you’re doing the opposite of:

Let’s do it.  Notice that F is in a group.  We need to resolve that first. 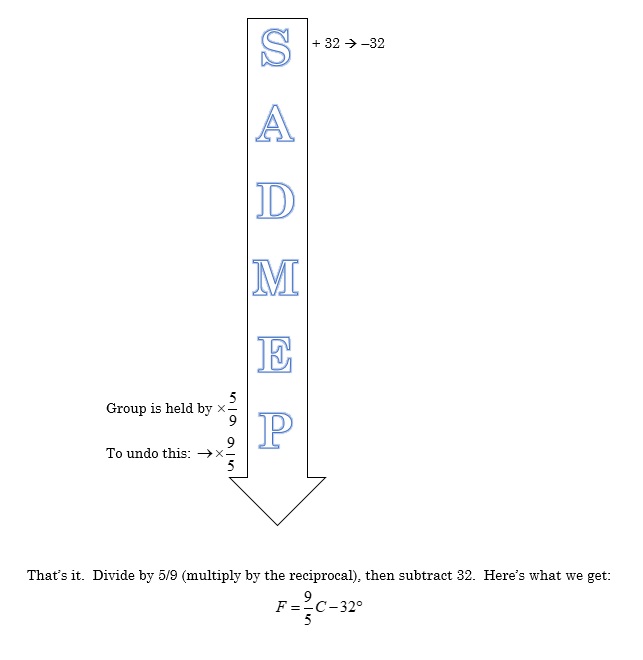 The key idea is that you need to read the formulas mathematically.  Ask yourself, what are the operations taking place here between my desired subject (as in solve for x, x is the desired subject)?  What’s their proper order?  Then, reverse those.

Let’s see an example where things get tricky.  Solve for d.

This might look impossible, but if we analyze what is happening with operations, this is very approachable.   Here are some guiding ideas.

These bullet points above are perhaps the most difficult part about this application of Algebra.  We are not used to carefully decoding a written language.  However, that’s the key here!

Now all we have to do is figure out the order in which to perform these operations.  This is where using our acronym SADMEP comes in handy.

Subtraction and addition come first, groups are last.  Here, we only have one operation that exists outside of the grouping.  The group held together by the hth root.  That makes our steps as follows.  But, keep in mind, these steps are NOT universal.  These steps only apply to this specific problem.  The steps to solve these kinds of problems are (1) identify the operations, (2) perform inverse operations.

Here are the steps for this problem. 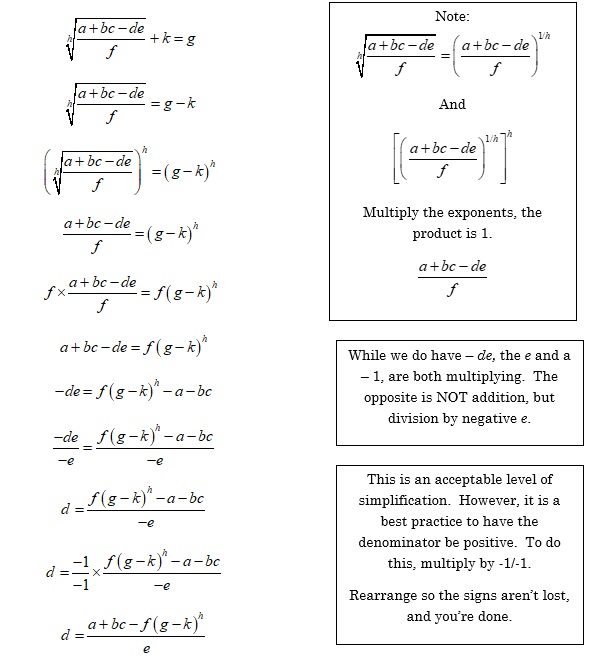 Does that seem overwhelming?  It might.  But this was about as difficult of a situation as you’ll ever find!  You try this one on your own.

This is a bit of a curve ball because you have a pair of ms, and you need them together.  But, on the left, the 4m is stuck in a group being divide by 3.  So, did you multiply both sides by three first?

In this situation, sometimes it is best to distribute, sometimes not.  Here, distributing is best because we don’t want the m on the right of the equal sign to be stuck in a group!

Did you subtract 3m from both sides next?  If not, this is something you need to remember:

Try and collect all of the desired subjects together first.  When adding and subtracting to move from one side to the other, move the term with the smaller coefficient.

Allow me to change this equation slightly to introduce something that might be new to you:  The opposite of distributing, which is called FACTORING.

If m(a + b) = am + bm, because you can distribute, could you start with am + bm and end up with m(a + b)?  Absolutely, and that’s called factoring.  Let’s replace the 3 and 4 in our previous example with a d and an e, and see how this comes into play.

Same steps here, and note that in math, em is the same as me.  That is mathematical language, not English.  The whole commutative property of multiplication applied to English would make spelling for dyslexics a whole lot easier, right?

We will multiply both sides by d, first.

Here we do NOT know which term is larger, em or md.  But, both contain our desired subject, m.  We just pick a side and move all of the terms with m to that side.  Let’s move the md this time.

Notice how we added in a plus symbol in front of the term em.  Without it we would be multiplying.  On the right, the md and – md combine to make + 0.  Now, let’s add ab to both sides.  We will also rearrange things in descending order.  For now, that’s just alphabetically.  This is a great practice because it is TOO easy to miss like terms when they’re written out of order.  For example, 2me and 3em are like terms, but they don’t look like it when written out of order.

Here we have two ms, and we cannot combine them.  They’re NOT like terms.  But what we can do is undistributed them ms.

Summary:  The big idea here is that you need to read the mathematical operations between unknowns (variables) that are not directly next to one another.  Apply the inverse of those operations and you’re golden! 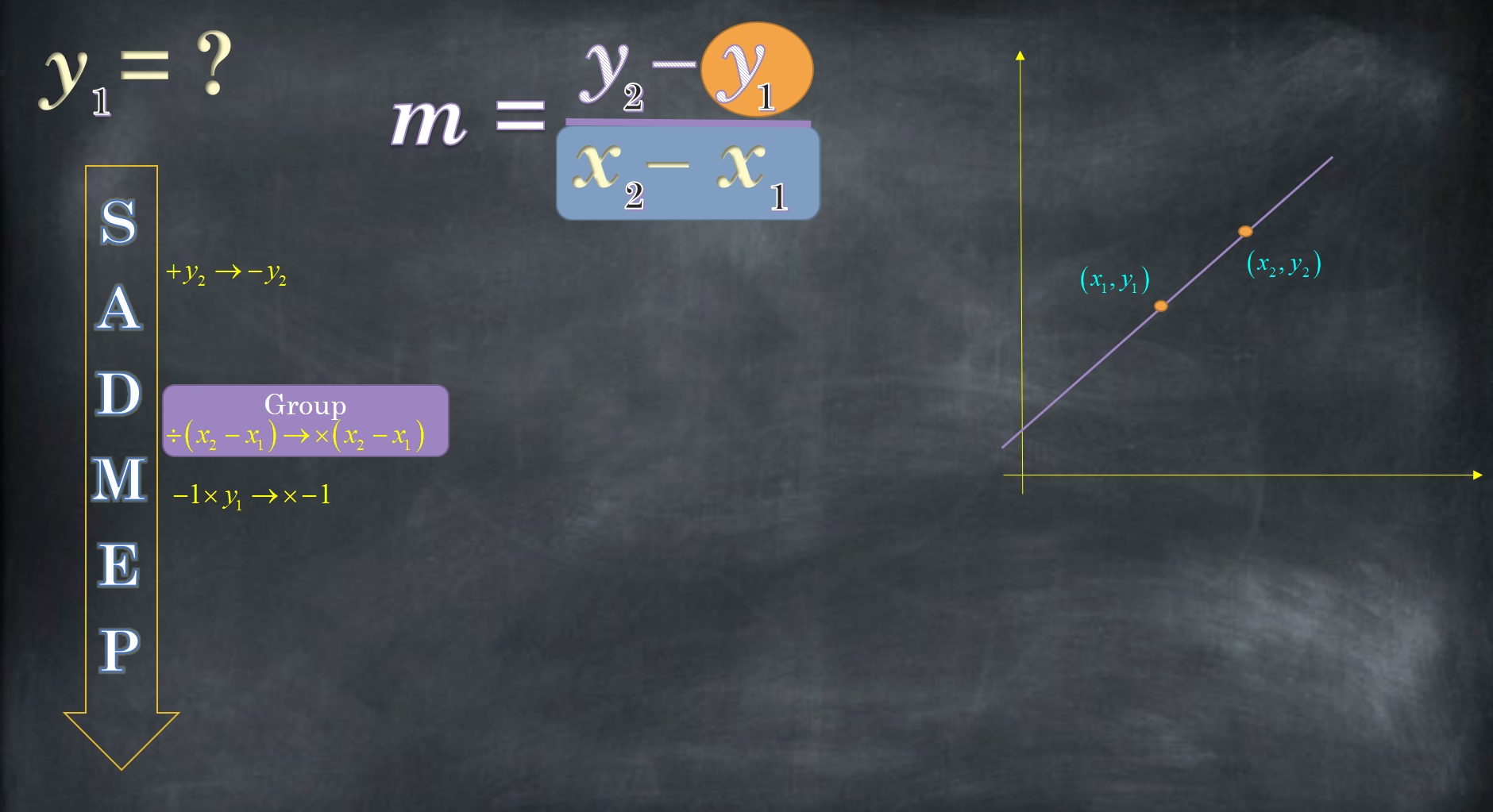 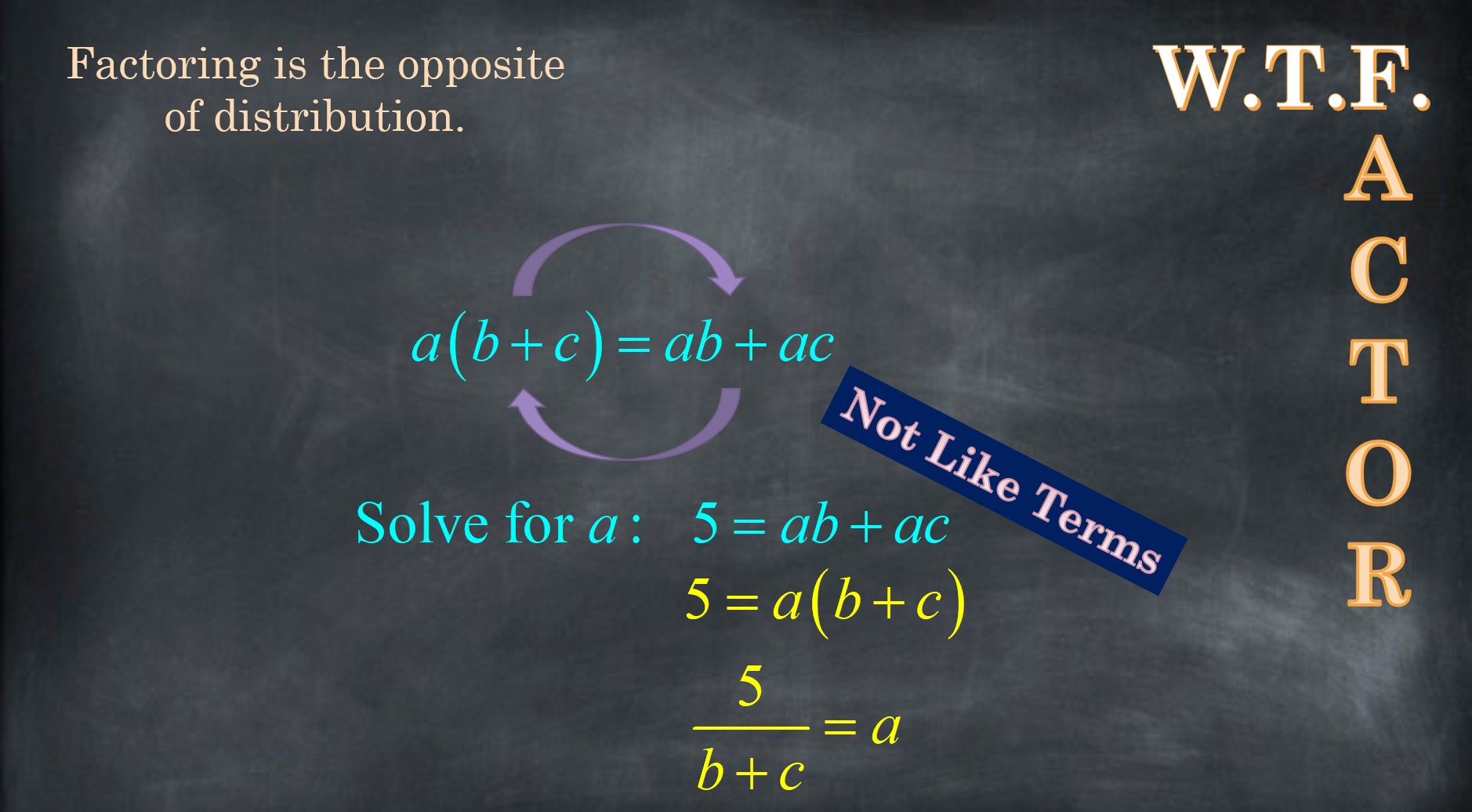 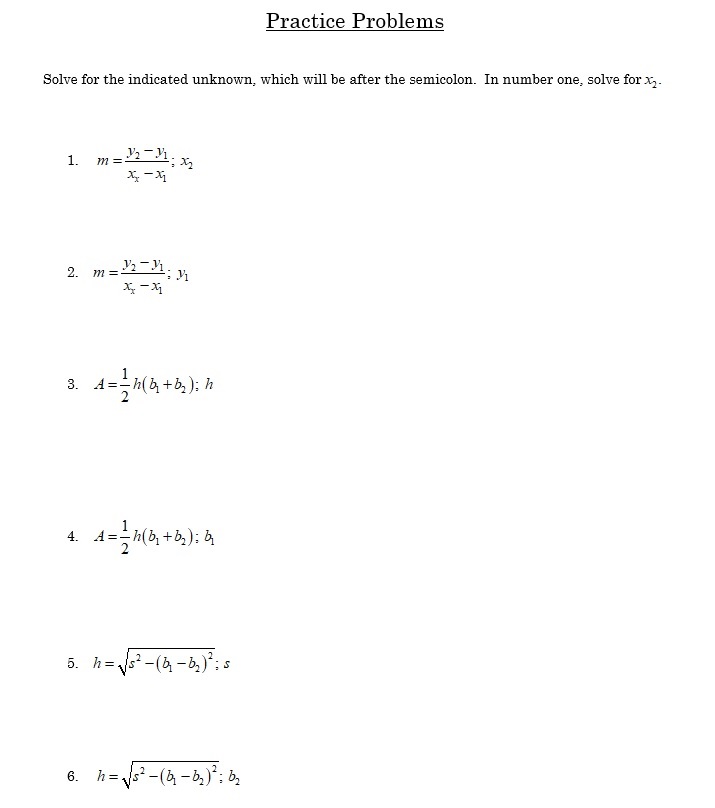