Language and the Order of Operations

We can think of Algebra as the language we use to write mathematics.  What language does is compress ideas and thoughts so they’re easily referenced.  In English words are what we use to compress the ideas and thoughts.  The power of language is such that, if you’re fluent, the moment you hear a word the idea and all of its associations instantly pop into your mind.  Consider “apple.”  You see a shape, colors, foods, maybe a setting or memory involving an apple, a tree, other fruits … and so on.  Try not to do the same when you read the word, “flower.”

There are “dead,” languages, which mean they’re no longer changing to match new ideas and thoughts.  Latin is a great example.  You cannot say, “My smart phone app crashed,” in Latin.  Sometimes people think that mathematics is a dead language because it is not spoken, but that is far from reality.  Math is changing, evolving to match new discovery and understanding.  It is applied to all sorts of new arenas and topics continually.

Q:  How is math a language?

Math is a written human language.  Like all languages there are agreed upon rules that allow us to understand the language.  In math the spatial arrangement of characters (symbols like numbers and operation signs) convey the meaning.  For example, 34 means repeated multiplication of 3, four times.  It is another way of writing 81.

Here’s an example of why we multiply before we add.

What writing the mathematics allows us to do is compress the meaning.  Let’s consider the above statement in English and compare it to mathematics.

English:  There is a value that you can find if you add five and two, then multiply that sum by three.

See what I mean?  Math is compressed, made smaller without losing meaning.

Big Idea:  Read the math for the intended meaning, not just for the calculation to be performed.  This will help you as you move forward into Algebra.

There’s no need for Algebra when all of the numbers are known.  Understand, though, that each of those numbers 3, 5 and 2, are abstractions.  They could represent candy bars or numbers of extra fingers that began to grow on your hand after you messed up the experiment in your chemistry class!

One of the powerful things that Algebra will allow us to do is make an abstraction from an abstraction.  A simple example can be built from our expression 3 × (5 + 2).   We know this value is 21.  If we knew the result, but not one of the components, we can write that in Algebra.

This is a simple example of how Algebra can represent something.  Here the character x represents an unknown number.  In finding the value of x, we are finding the solution.  A solution is a value that resolves an equation.   That’s actually a pretty good translation of what Algebra means.  Algebra roughly translates to Rules of Reintegration and Reduction, which means to follow the linguistic structure of mathematics to discover something unknown.

In Algebra we rarely write multiplication with the symbol × to signify multiplication.  What we do instead is write different numbers or terms next to one another.  This obviously doesn’t work with a number like 248, but it does work with 24x.  Most will know this, but it is worth mentioning as it is an important part of learning to read mathematics.

Instead, we would write:  3(x + 2) = 21.  Algebra is a way of writing mathematics so that by manipulating the rules of writing we can resolve a question.  You may, or may not, already know the inverse operations for this equation.  Before we get into that, the “steps,” let’s look at this logically.

Since 7 is two more than 5, x is 5.  Boom, done.  Algebra uses regression of the rules of mathematics (order of operations) to resolve an equation.  The resolution exposes the solution, the value that makes the equation true.

Unless otherwise specifically directed, it is best to figure out the solution to an equation in the most logical way possible, using properties of basic arithmetic as we just did.

As it turns out, the inverse operations are almost the same exact thing, but less natural feeling.

Since the x + 2 is grouped, that operation of addition goes after the inverse of multiplication.  We need to divide both sides by 3.  It is exceedingly rare to use the symbol ÷ for division as it is clunky and cumbersome.  We typically write division as a fraction.

Reduce each side to arrive at:

This is where Algebra can be a little strange.  In Algebra we write equation horizontally, in a row.  However, to save space we often perform inverse operations in a column, underneath.  If we did the inverse operation of + 2 in a row, it would look like this.

A Word to the Wise

The word cancel is used a lot in mathematics.  That is unfortunate because cancel does not appropriately describe the mathematics.  Consider these two examples where cancel would likely be used.

Can you solve both equations logically, without following inverse operations?  Be patient with yourself, think about it for a few moments if the answers don’t present themselves immediately.  Read them carefully, and perhaps replace letter x with what number.

If you read it this way, x2 = 25 becomes “What number squared is twenty-five?”  You probably know the answer to that!

The second equation is, “Five times what number is 40?”  You probably know that, too.  These are simple examples, but this approach of reading and thinking can work great for complicated and ugly problems.

For x2 = 25, if we followed inverse operations, we would have to take the square root of both sides.  The inverse of squared is square root because square root is the exponent of ½, and ½ times 2 is just one.  We do not need to write an exponent of 1.  It is this:  (x2)1/2, which is just x1.

With the second example, using inverse operations we would get the following.

On the right people will typically say that 40/5 reduces to 8.  But they rarely say that 5x/5 reduces to x.  It is more than just semantics here.  Words convey meaning and understanding.  They help you to think!  If your language is inaccurate or sloppy, your thinking will follow.

What we have on the table, so to speak.  Math is a written language.  Like all languages there are rules that structure the information.  This structure allows you, the reader, to understand the intended meaning of an author.  It also allows you to become an author and communicate with another reader.

Language and thought are carefully intertwined.  When you are fluent in a language it changes the way you think because the associations of ideas and words are related in slightly different fashions between different languages.

Language creates abstractions that compress ideas.  Those abstractions can be examined to uncover deeper, or hidden meaning.

Algebra is a way to use the structure of math in a regressive (backwards) fashion to resolve a statement (find the value or values that make it true). 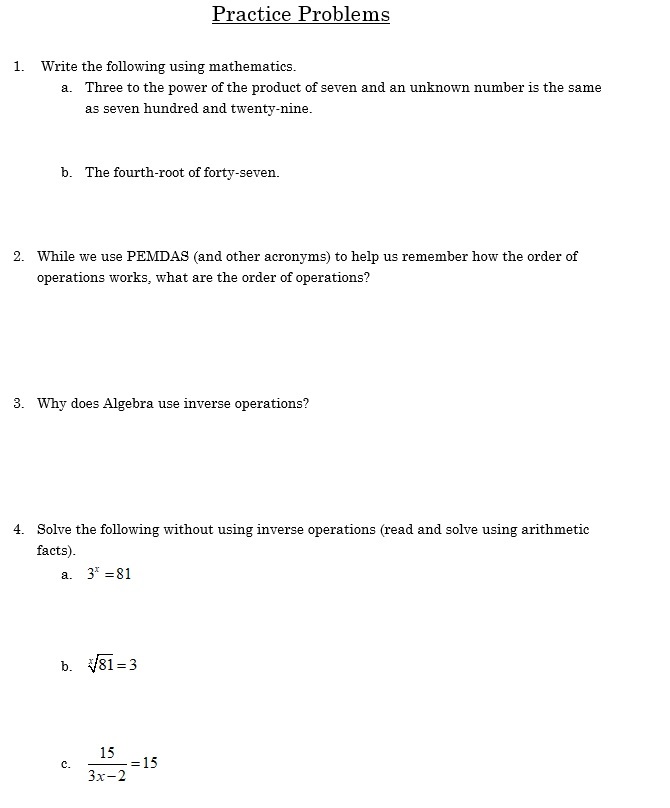